Centermen are on the move in the April edition of our ISS Top 31, as seven different players at the center position move closer to the top of our 2017 NHL Draft list. 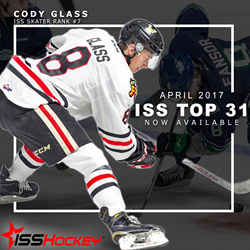 Glass is the type of player that makes his teammates around him better. Lots of offensive upside as he continues to put his elite hockey sense on display. There has also been a noticeable improvement in his defensive play.

ISS Hockey has released its monthly rankings of the top prospects for the 2017 NHL Entry Draft. This month's rankings include the top 150 skaters, along with the top 15 goaltenders, as evaluated and ranked by ISS Hockey's worldwide network of scouts.

Below is the ISS Top 31, highlighting the rankings for the top 31 prospects, which is released the first Wednesday of every month during the hockey season. An interactive page where the ISS Top 31 can be viewed, sorted, commented on and where users can interact with our scouts, can be viewed at isshockey.com/iss-top-31

Centermen take over the top three spots in the March Release of the ISS Top 31, as Gabe Vilardi (Windsor, OHL) moves into third behind Nolan Patrick (Brandon, WHL) and Nico Hishchier (Halifax, QMJHL), who carry ISS Hockey rankings of #1 and #2, respectively.

Several other players at the center-ice position have climbed this month. Most notably, Cody Glass (Portland, WHL) has moved up seven spots into seventh and Nick Suzuki (Owen Sound, OHL) has jumped up into seventeenth. ISS Hockey Director of Scouting, Dennis MacInnis, continues to be impressed with the play of Glass.

“Glass is the type of player that makes his teammates around him better. Lots of offensive upside as he continues to put his elite hockey sense on display. There has also been a noticeable improvement in his defensive play.”

Finish goaltender Ukko-Pekka Luukkonen remains ranked number one for another month with Oettinger (Boston University, H-East) following in closely at number two for the ISS Top Goalies. The large-framed goalies have a strong hold on the one and two position for the 2017 NHL Draft.

About ISS Hockey
ISS Hockey (International Scouting Services) is the world’s leading independent scouting and information provider on hockey prospects. Founded in 2002, ISS is a division of HockeyTech, a worldwide leader in hockey technology, analytics and information services. ISS scouts, evaluates, analyzes and ranks players internationally on behalf of its many clients. ISS data is widely utilized in the hockey world, building an industry leading reputation for the best and most comprehensive scouting information. The key to the success of ISS is the incredible worldwide network of ISS Hockey scouts. ISS scouts are within reach of every young hockey player in the world, and attend every major hockey tournament, in addition to thousands of league games. All players that we rank will have been seen and evaluated many times by several ISS scouts.