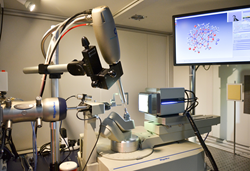 The University of Manchester and Rigaku Oxford Diffraction (ROD) are delighted to announce the forthcoming installation of a Rigaku XtaLAB FR-X DW X-ray diffractometer system in the School of Chemistry. The instrument will be equipped with the ultra-high brightness FR-X rotating anode dual wavelength X-ray source, in conjunction with dual diffractometers with the state-of-the-art HyPix-6000HE hybrid photon counting area detectors and a fully-automated robotic crystal handling system. With this configuration, this instrument will be the clear highest performance X-ray crystallography installation in any university research facility, worldwide.

The ultimate performance capability of the XtaLAB FR-X DW system will provide first class support across the breadth and depth of all of the themes of endeavor in the University of Manchester: world-leading research, for instance, in the areas of catenanes, rotaxanes, molecular knots and molecular motors, molecular magnetism, metal-organic framework materials and radiochemistry, etc. Throughout these research areas, - many with large and complicated molecular assemblies, the available crystals are very small and therefore fundamentally extremely weakly diffracting. The performance of the XtaLAB FR-X DW will allow far higher resolution definitive structure-elucidation in these complicated materials and with this a finer understanding of important structure / function relationships. Already, just following installation and commissioning, the new equipment is allowing the detailed structure elucidation of as many as 20 new material structures, per day.

Prof. Richard Winpenny, Head of School, said: “This is a further investment from EPSRC in the School of Chemistry at Manchester. This is world-leading equipment to support world-leading science, and will support unique work such as Prof Dave Leigh’s work on molecular robotics, and Prof Martin Schröder’s work on metal-organic frameworks. It also allows us to develop further our radiochemistry work led by Prof Steve Liddle, by allowing

structures of trans-actinide complexes to be measured using facilities that are otherwise only available at synchrotrons. I believe we are now among the best equipped School of Chemistry for X-ray diffraction studies anywhere.”

“Rigaku Oxford Diffraction is extremely proud to be affiliated with a Chemistry department of such high esteem,” stated Dr. Paul Swepston, global manager of the Rigaku Oxford Diffraction division within Rigaku. “The philosophy of our group is to focus on the success of our customers, and with such a high powered X-ray system and one of the world’s premier Chemistry departments, we will enjoy supporting a wide range of research projects in the years to come.”

Chemistry has a long and distinguished history in Manchester. John Dalton founded modern Chemistry in Manchester in 1803 with his theory of atoms, and James Joule established the foundations of thermodynamics in Manchester in the 1840's. More recently, two Chemistry Nobel Prize winners have figured in the alumni: John Polanyi (1986), and Michael Smith (1993) both studied for their Chemistry BSc and PhD degrees in the University of Manchester.

The first instrument to be installed in the U.K. by Oxford Diffraction was the Xcalibur instrument: installed in the School of Chemistry, University of Manchester in 2003, and still running very well. In early 2013, a highly performing SuperNova –type system was added to the local facilities. With the installation of the XtaLAB FR-X DW instrument, the University of Manchester and Rigaku Oxford Diffraction look forward to the most fruitful continuation of our valued collaboration.