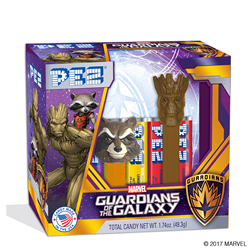 PEZ Candy, Inc. today announced the latest addition to its product line with the addition of Rocket and Groot from Marvel’s Guardians of the Galaxy. The all-new Guardians of the Galaxy Twin Pack features the iconic Groot and Rocket with Rocket appearing on a twin-pack exclusive mini PEZ dispenser. The Marvel PEZ assortment has been updated to include Rocket and Groot in addition to Marvel favorites Spider-Man, Iron Man and Captain America.

Set to the all-new sonic backdrop of Awesome Mixtape Vol. 2, Marvel Studios’ Guardians of the Galaxy Vol. 2 continues the team’s adventures as they traverse the outer reaches of the cosmos. The Guardians must fight to keep their newfound family together as they unravel the mysteries of Peter Quill's true parentage. Old foes become new allies and fan-favorite characters from the classic comics will come to our heroes' aid as the Marvel cinematic universe continues to expand. Marvel Studios’ Guardians of the Galaxy Vol. 2 premieres in U.S. theaters May 5, 2017.

About Marvel Entertainment
Marvel Entertainment, LLC, a wholly-owned subsidiary of The Walt Disney Company, is one of the world's most prominent character-based entertainment companies, built on a proven library of more than 8,000 characters featured in a variety of media over seventy-five years. Marvel utilizes its character franchises in entertainment, licensing and publishing. For more information visit http://www.marvel.com © 2017 MARVEL.

About PEZ Candy, Inc.:
Based in Orange, CT, PEZ has been inspiring and innovating since 1927, PEZ Candy, Inc. is the pioneer of interactive candy that is both enjoyable to eat and fun to play with. PEZ dispensers are a hot collectable for adults and children alike and have been a staple of American pop culture for over 60 years. To learn more, visit pez.com.