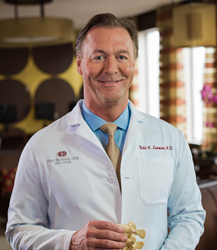 A new study has been published in the peer-reviewed Journal of Neurosurgery: Spine documenting the favorable outcomes at the two-year postoperative mark of a two-level cervical disc replacement using a Medtronic Prestige LP device in contrast to that of anterior cervical discectomy and fusion surgery (ACDF) for treatment of degenerative disc disease at two adjacent disc levels.

The study, which is now available to the public, was authored by six prominent spine surgeons, one of which includes one of the world’s leading innovators in spine health and total disc replacement, Dr. Todd H. Lanman, founder of the Beverly Hills-based practice Lanman Spinal Neurosurgery (http://www.spine.md). The other surgeons include: Matthew F. Gornet, MD, Jeffrey R. McConnell, MD, J. Kenneth Burkus, MD, Randall F. Dryer, MD, and Scott D. Hodges, DO.

Dr. Lanman was the principal investigator of the clinical trial for the titanium-ceramic composite Prestige LP replacement device, leading to its FDA approval later last year.

The published peer-reviewed medical journal article documents the randomized controlled clinical trial that studied 209 investigational patients undergoing a two-level disc replacement in their cervical spine, or cervical arthroplasty, using a Prestige LP, along with 188 control patients undergoing ACDF, all within the period of June 2006 through November 2007.

At the 24-month post-op mark, overall success, measured against a number of criteria, including neck and arm pain scores, revision surgeries, gait abnormality, neurological status, and other factors, was found to be statistically superior for those undergoing a two-level cervical disc replacement (81.4%) to that of those undergoing ACDF (69.4%).

The conclusion documented by the authors of the study was that two-level cervical disc replacement using a Prestige LP cervical disc replacement device had been found at the 24-month postoperative mark to be just as effective and safe as ACDF for treatment of cervical disc degeneration disease at two adjacent disc levels. Anterior Cervical Discectomy and Fusion (ACDF), which originated in the 1950s, has until recently been the standard surgical procedure for those suffering with the disease.