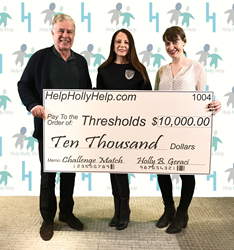 The Thresholds challenge started slow, but heated up, with donations coming in spurts.

Similar to past challenges, donations came in varying amounts. Donations ranged from thousands of dollars to tens of dollars. Regardless of the amount, Holly Geraci and Peter Francis Geraci match each donation. The Thresholds challenge started slow, but heated up, with donations coming in spurts. By the middle of March, Thresholds was about halfway to $10,000. However, it was not until March 29, 2017, that the final donation took Thresholds to the grant challenge threshold of $10,000. The challenge was an excellent success for both Thresholds and helphollyhelp.com.

Since starting the Grant challenge in October of 2016, Holly Geraci and Peter Francis Geraci have issued four grant challenges. In total, the Help Holly Help Grant challenges have raised more than $124,000. Helphollyhelp.com is looking forward to their next challenge.

Holly Geraci and Peter Francis Geraci have already selected the next "Help Holly Help Grant Challenge." The challenge was posted on Mrs. Geraci’s Facebook page and on Help Holly Help.com on April 7, 2017. The next challenge will run from April 15, 2017, through May 15, 2017.