Contemporanea Eventi, a stand design company, which has designed the Alcatel’s company stand for the Mobile World Congress this year, has been considered the best stand by attendees. 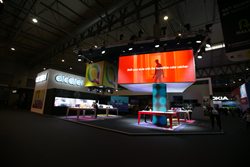 The creation of an exhibition stand for a firm, for us, is always an important affair. An ephemeral set up implies the action of many professionals who have to collaborate at the same time, in the same way, with their know-how.

From February 27th to March 2nd, the Mobile World Congress, the largest mobile phone congress in the world, was held in Barcelona. This is where the world's largest phone companies take advantage to launch their latest innovations and technological advances.

One of these companies was Alcatel, with its spectacular stand, who has introduced the Alcatel A5 LED, the first interactive Smartphone with LED case. This new system was designed for the younger audience, and that’s why Alcatel has thought to make a more exquisite stand, full of contrasts between technology and vintage style. This was what made the Alcatel stand the best valued by the attendants.

To attract the attention of over 100,000 visitors (planned for the organization of the event), the stand must have one of the most striking and functional designs at the event. That was what was achieved by Contemporanea Eventi with the Alcatel stand. However, it took half a year to achieve the success wanted by the brand.
The world of stands is like the world of gastronomy; the quality of the ingredients, the order, and the arrangement; that's what differentiates a dish that is used directly to feed from one that is designed to be enjoyed through sight and taste. That stand, which can distinguish itself from the rest, will be the one that attracts all eyes.
It was important to know how to choose the corporate colours, the music, the location and, in general, create an excellent space in which the value of the brand was transmitted. A good stand speaks for itself, and having a good design is the best speech.

This idea was evident in the philosophy of companies like Contemporanea Eventi, which was created ten years ago in Barcelona by an Italian Architect, Gabriele Pranzini. This strategy has been used by the specialized stand design company to ensure that the project carried out with Alcatel was the best valued by the Mobile World Congress 2017 attendants.

An architect by profession, Pranzini knew that the image of a stand was everything, so he applied the so-called 'Italian Design' to his projects, characterizing them with the elegance combined to the unique innovation of the Alpine area. “The creation of an exhibition stand for a firm, for us, is always an important affair. An ephemeral set up implies the action of many professionals who have to collaborate at the same time, in the same way, with their know-how. Our passion and experience were illustrated in the final result,” he explained.

The stand made for the MWC’17 was able to combine the latest innovations of the stand's design with a retro style inside the stand. This combination made attendees feel attracted by each of the details that were exposed.