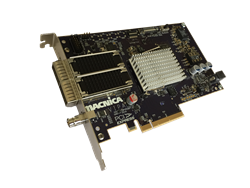 Macnica is proud to introduce the first full multi-standards compliant IP product for software applications in the broadcast network, with full hardware acceleration of RTP protocols based on our mature intellectual property.

VIPA supports all the professional live video over IP protocols – SMPTE2022-1/2/5/6/7, SMPTE2110 (TR-03) and Sony NMI using Macnica’s own intellectual property developed over the last five years. Macnica’s IP has been repeatedly demonstrated at Video Services Forum (VSF) interop events. Customers will now be able to access this technology in the form of a PCIe Gen3x8 card, and make use of a standard PC/server environment to enable professional video transport over IP networks.

VIPA supports up to 4K video modes and uses light, visually lossless compression for 4K applications. VIPA streams video directly to host memory without the use of an on-board frame buffer and is capable of sub-frame latency. VIPA will ship with a Linux driver, NMOS and Sony LSM compatible API’s, and a full SDK to allow developers to port their applications onto the platform. A Windows driver will be released later this year.
An optional 3G-SDI extender allows VIPA to support four channels of 3G-SDI, full duplex (four Rx channels and four Tx channels). VIPA can be used to media convert SDI to any IP protocol and vice versa, and to media convert from one IP protocol to another.

VIPA transports up to 250 independent media channels of video, audio and ancillary data per 10G link – and channels can be configured to any IP protocol, allowing the card to be used in a system that mixes any combination of 3G-SDI, SMPTE2022-6, Sony NMI and SMPTE2110.

Macnica is showcasing VIPA live demonstrations at the 2017 NAB Show in Las Vegas, NV at its booth #SU12713. In addition, the VIPA card will be featured in the IP showcase located in booth #N4824. Details for the NAB Show can be found at http://www.nabshow.com.

More information on Macnica and its products is available at http://www.macnicatech.com/.

About Macnica
Macnica Technology, a division of the $4B Macnica Group, offers products that implement the ST2022, Sony IP Live and ST2110 standards for moving live, high-definition and 4K video over standard IP (Ethernet) networks. Macnica leverages its video and high-speed networking expertise to develop superior products and intellectual property for the broadcast, pro-AV, and high-speed networking industries. Find out more about the new VIPA card and Macnica’s video over IP transport technology at http://www.macnicatech.com.