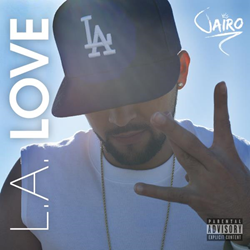 JAIRO, an independent recording artist started writing, recording and performing at a young age in both Los Angeles and Minneapolis. His love for music and respect for those who have come before him have shaped him as an artist. Hip-hop is the foundation of where it all began however, growing up in the late 90's and early 2000's you can hear the music inspirations range from pop music to rap and everything in between. Some of his music influences and inspirations are Michael Jackson, Eminem, Drake, The Weeknd, Biggie Smalls, Tupac, Tito El Bambino, Wisin Y Yandel & Zion Y Lennox to mention a few.

Listening to Michael Jackson's uptempo pop tracks and catchy melodies as a youth was the first thing he can remember gravitating towards. Yet, at the same time, growing up in Los Angeles, listening to artists like Tupac, Ice Cube and Snoop Dogg is where he grabs a more edgy side to his lyrics and vibe. As an artist he's making his stamp in the industry by combining both worlds and Latin influences to make the ultimate listening experience.

His latest single, “L.A. Love,” was recently released and is currently available to stream and download on Coast 2 Coast Mixtapes.