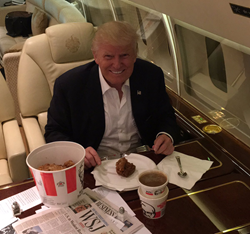 85% of the respondents believe that it is important for the President to support exercise and healthy living.

According to a new study conducted by Great Blue Research, fitness-conscious Americans believe President Donald Trump is falling short when it comes to supporting their lifestyles.

The survey was commissioned by Zoom Media, the exclusive advertising and health content provider for the nation’s largest health clubs, and polled over 2,500 members of Generation Active. Zoom defines Generation Active as the over 100 million Americans who exercise at least twice a week.

48% of those polled expressed concern that President Trump does not appear to be fit himself or to promote fitness.

The study revealed that these fit Americans expect the President of the United States to set an example. 85% of the respondents believe that it is important for the President to support exercise and healthy living.