"The Easter Resurrection story is a hoax, concocted by St. Paul to mislead the Jews into believing Jesus was a false Messiah. How? By misrepresenting his survival of the crucifixion ordeal as an accursed death and resurrection,” says author Syed M. S. Nasser. 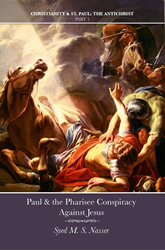 The picture of Paul that emerges from this captivating study will shock many to the core, and will shake the very foundations of their religion

Paul & The Pharisee Conspiracy Against Jesus by Syed M.S. Nasser, claims that St. Paul, not Jesus, was Christianity’s real founder. Drawing on sources both from the New Testament and from 1st century secular histories, Nasser claims that St. Paul, posing as a follower of Jesus, maliciously concocted Christian doctrines to misrepresent Jesus as an apostate.

Historical records show that St. Paul misrepresented Jesus' survival of the crucifixion ordeal as his death and resurrection. Why? So Jesus could be regarded as “accursed of God” in accordance with the Old Testament declaration (Deut 21:23). His goal? To turn orthodox Jews away from accepting Jesus as the Jewish Messianic Prophet.

When Jesus’ apostles found out that St. Paul had been propagating doctrines contrary to Jesus' teachings, they called on St. Paul to demonstrate public repentance of his corruptions (Acts 21:22). Before St. Paul could complete his rituals, he was mobbed in the Temple by followers of Jesus from Asia (Acts 21:28), who, having received his heretical doctrines through his epistles (Galatians), regarded him as a perverter of Jesus' teachings. Nasser shows how St. Paul subsequently renounced Jesus in his trials (Acts 24-26), and how 1st Century secular Jewish histories further suggest that St. Paul returned to being a Pharisee.

Finally, this research shows that the first three Popes in Christian history - Linus, Anacletus and Clement - were Pharisees employed by St. Paul during his life, who continued his mission after him, creating the first church in Rome. Demonstrating that the Church, along with all major Christian doctrines were concocted by St. Paul to misrepresent Jesus, as understood by his disciples and apostles, Nasser has produced a work that will be of the greatest interest to readers across the world, especially as Christians everywhere have recently celebrated Jesus’ resurrection, on Easter Sunday.

"The picture of Paul that emerges from this captivating study will shock many to the core, and will shake the very foundations of their religion" - Jahangeer Khan, Lecturer in Theology & Comparative Religion