Women are the majority in almost all demographics in the United States including groups that are poor, rich, heads of households, main tax payers, single parents or represent different racial and religious organizations and yet they are under represented by the elected public servants. Today on Dr. Carol Francis Talk Radio, many women voice their protest or resistance against Trump's Executive Orders or Congressional bills that are anti-women pertaining to health care, employment rights, family assistance, and educational needs. 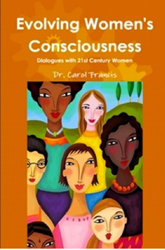 Society and laws will evolve as women recognize and act like the majority they are who can harness immeasurable power to create a humane society regardless of money pounding lobbyists.

Evolving society requires that women evolve into recognizing the position they already hold: the majority of consumers who can vote with their moneys, with their votes, with their protests, NOW.

Interviews with women voters who protest Trump's executive orders and Republican Congressional bills which jeopardize the well-being of women broadcasted live (May 1, 10AMPCT) or podcast at Dr. Carol Francis Talk Radio or at http://www.blogtalkradio.com/dr-carol-francis/2017/05/01/trump-and-republican-congress-jeopardize-womens-health-pay-employment.

“Reaction’s to Trump’s first 100 days of anti-women policies are explored on Dr. Carol Francis Talk Radio May 1, 2017 include professional and uneducated hard working women from different racial and economic backgrounds. They voice their disapproval of multiple executive orders, budget proposals and congressional bills which Trump has authored, signed or supported during his first 100 days as an unpopular POTUS. These women, also from diverse political backgrounds speak anonymously to assure frank conversations about how Trump seems intrinsically to view women as less-than full citizens and not deserving of equal respect by the laws and protections. During these interviews, it becomes clear that woman who were aware of Trump’s prior, repeated disrespectful verbiage and treatment of women, were not surprised at his executive decisions, while women not educated about his former anti-women actions felt betrayed and deceived by Trump’s with his antagonistic decisions. Both groups of women unite believing the POTUS and Congress should pass laws that are clearly respectful and protective of women’s health, women’s safety in the work force, women’s primary struggles as single-parent income earners, and women’s struggle for equal pay for equal work as well as protective of essential natural resources impacting their families’ air, water and food” describes Dr. Carol Francis

About the Guests: Women and men interviewed were promised anonymity in order to inspire frank and safe disclosures of their political leanings, reactions to Trump’s anti-women policies, and their concerns about health, finances, environment, and families.

About the Host: Dr. Carol Francis, author of Evolving Women’s Consciousness, Dialogues with 21st Century Women and a Clinical Psychologist and Marriage, Family & Child Therapist, extends these opportunities for ordinary citizens to voice their worries about current social concerns.