In a newly published study in Nature Nanotechnology (https://www.nature.com/nnano/journal/vaop/ncurrent/full/nnano.2017.47.html), the shape and geometry of nanoparticles can have a significant impact in modulating adverse injection reactions and offer realistic solutions for patients receiving nanopharmaceuticals—drug delivery systems specializing in microscopic-particle drug combinations. 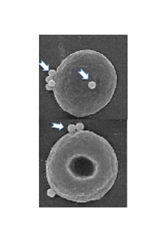 In a newly published study in Nature Nanotechnology (https://www.nature.com/nnano/journal/vaop/ncurrent/full/nnano.2017.47.html), the shape and geometry of nanoparticles can have a significant impact in modulating adverse injection reactions and offer realistic solutions for patients receiving nanopharmaceuticals—drug delivery systems specializing in microscopic-particle drug combinations. Almost reminiscent of the popular 1966 Fantastic Voyage movie where a team of scientists and their ship were shrunk down to microscopic—nanoparticle—size to enter a dying man’s body to cure him.

Geometry and hitch-hiking are not the first things that come to mind regarding the immune system. However, the recent work by Moein Moghimi, Professor and Chair of pharmaceutics at Durham University, United Kingdom and collaborators shows that geometry is key in nanoparticle recognition by the immune system. When a patient is infused (slow injection) a nanomedicine, in some rare cases reported, the patients react immediately with allergic-like symptoms and creating what in medicine is known as adverse or anaphylactic reaction. Understanding why these adverse reactions happen in some patients and not in others and how to overcome it is what Moghimi and collaborators address in this intriguing paper.

By using spherical shape particles, the team discovered that a cardiopulmonary distress (a sign of anaphylactic reaction) is triggered. “In general, these particles are expected to be rapidly intercepted in the blood by scavenger cells known as macrophages. When these cells eat too much of these particles and especially too fast, they release some potent substances (inflammatory mediators) into the blood that triggers adverse reactions. The next question then was; could shape make a difference in triggering adverse reaction.” Moghimi explained. “We literally went back to the blackboard and did calculations. We wanted to understand how these blood scavengers see an object in the blood in terms of its shape and volume for grabbing. So, we came up with the idea of deviating from a symmetrical shape (sphere) to slow down macrophage ingestion or even trying to make the particles invisible to reactive macrophages.”

Next, the team made more particles but in the form of rod and disk morphology of a dimension similar to the diameter of their spheres. Amazingly, it was clear that the morphology and geometry was playing a major role in dampening adverse reactions to nanoparticle injection. In order to explain this better, Moghimi uses an example of a river. “Imagine a number of things/objects floating on a river and having to go through a gate. Depending on their dimensions, orientation, and volume (i.e., their shape) some of those objects will be stopped and actually impact the flow as they try to get through the gate.”

Also, the team explored “hitch-hiking”, an idea introduced earlier by Moghimi’s collaborator, Samir Mitragotri at the University of California Santa Barbara, where particles are hidden from the blood scavenger cells. This technique also worked proving that spheres, when attached to red-blood cells (like back packs), could not be ingested by the macrophages causing adverse reactions to disappear, according to Moghimi.

Recognizing that these simple approaches can create strategies for better and more patient-tailored nanomedicine (Personalized Medicine) could be a breakthrough for nanopharmaceuticals. Considered particle engineering at its best, these simple-by–design approaches, as Moghimi and collaborators write in the paper, could lead to better nanopharmaceutical solutions to overcome injection-related reactions. Even with spherical particles, hitch-hiking on red-blood cells may provide a viable clinical solution.

Though considered early in the study process, Moghimi notes the results offer great insights into why these adverse reactions occur in some patients and not in others. The reactive individuals presumably have some scavenger cells (macrophages) that tend to cause trouble—an idea that had been a part of a hypothesis formulated by Moghimi last year.†

“About two years ago, I was wondering if there were physiological differences in some people that made them more susceptible to certain nanomedicines. Our recent work shows it is possible that the reactive macrophages in some people’s lungs and livers could be causing these reactions,” Moghimi states. He also notes as the studies are further applied in testing in humans, they could eventually lead to alternative solutions for patient-care. In the end, Moghimi advises that in today’s medical environment patients can and should be pre-screened for nanomedicine applications and that the future, according to his research, gives hope that better nanomedicines can and should be designed.