For the second consecutive year, Oakland Zoo, the Golden Gate Audubon Society (GGAS) and International Bird Rescue (Bird Rescue) have teamed up to save fledgling Black-Crowned Night Herons and Snowy Egrets fallen from their nest trees onto the busy streets of Downtown Oakland. 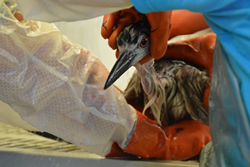 For the second consecutive year, Oakland Zoo, the Golden Gate Audubon Society (GGAS) and International Bird Rescue (Bird Rescue) have teamed up to save fledgling Black-Crowned Night Herons and Snowy Egrets fallen from their nest trees onto the busy streets of Downtown Oakland.

About 130 nests have been identified – making Oakland the largest rookery, or nesting colony, of Black-crowned Night-Herons in the Bay Area. So far six young birds have been rescued in the spring 2017 nesting season.

Zoo staff retrieve a fallen bird from its reported location, provide intermediary treatment, if necessary, and transport the bird to International Bird Rescue in Fairfield for long-term care. Having the Zoo’s experienced animal handlers serving as on-call rescue dispatch is a crucial component.

“We are thrilled to once again be part of this team effort to save these beautiful baby herons. The opportunity to take ‘Action for Wildlife,’ is important to us, around the world and right here in our city of Oakland,” said Amy Gotliffe, Conservation Director at Oakland Zoo.

Once the birds are delivered to Bird Rescue, a world-leading wild waterbird rehabilitative care organization with two centers, the care provided will help them develop the full range of skills needed for survival, such as self-feeding and flight. Like last year, the rehabilitated birds will be released into safe and appropriate local habitat, including Oakland’s Bay shoreline. In August 2016 nearly two dozen Oakland birds were successfully released.

This year Bird Rescue is attaching leg bands to all the rehabilitated Oakland herons so that the young herons can be returned to their native Oakland when they are full-grown. The team is also using bandages in green and gold – Oakland A’s colors.

"Urban nesters like Black-crowned Night-Herons are in trouble " said JD Bergeron, Executive Director of International Bird Rescue. "Their traditional nesting sites are now surrounded by busy streets and hard concrete, as well as people and cars. At Bird Rescue, we have developed a specialty in treating injured baby herons, but we rely heavily on members of the public, and partnerships like the one with Golden Gate Audubon and Oakland Zoo, to help find birds in peril and to transport them to our center. We have treated more than 800 baby herons and egrets [from Oakland and the greater Bay-Delta area] in just one season!"

Along with monitoring the Oakland heron colony for fallen and injured birds, GGAS has been putting up educational posters to inform Oakland residents about the herons. A dozen GGAS volunteers have been trained to monitor the colony closely and report birds in trouble.

"Last year we learned how effective partnerships can be in protecting urban wildlife," said Cindy Margulis, Executive Director of Golden Gate Audubon Society. "We're so pleased that these three organizations are cooperating again to save the lives of young birds hatched in a less-than-ideal location."

The dramatic-looking Night-Herons are longtime residents of Oakland and can frequently be seen foraging for fish, insects, and other food around Lake Merritt and on the estuary shoreline. They are so distinctive and beloved that third graders at Oakland’s Park Day School have launched a change.org petition to make them the official bird of Oakland.

Bird Rescue is seeking donations to support the rescue program this year, since costs to care for a single bird range from $600 to $1,800, depending on the condition of the bird and the level of care required.

ABOUT INTERNATIONAL BIRD RESCUE:
Since 1971, International Bird Rescue has been a global leader in responding to man-made disasters affecting wildlife, such as oil spills and marine debris. In addition to a fully-equipped emergency response center in Alaska, Bird Rescue runs two world-class wildlife centers in California which care for more than 5,000 animals each year, including pelicans, herons, shorebirds, and other aquatic species. This is made possible by over 60,000 volunteer hours kindly provided by a diverse group of retirees, nurses, veterinary students, and others. To date, their response teams have led rescue efforts in more than 200 spills across six continents. Visit International Bird Rescue to learn more.

The Bay Area’s award-winning Oakland Zoo is home to more than 660 native and exotic animals. The Zoo offers many educational programs and kid’s activities perfect for science field trips, family day trips and exciting birthday parties. Oakland Zoo is dedicated to wildlife conservation onsite and worldwide. Nestled in the Oakland Hills, in 500-acre Knowland Park, the Zoo is located at 9777 Golf Links Road, off Highway 580. The East Bay Zoological Society (Oakland Zoo) is a nonprofit 501(c)3 organization supported in part by members, contributions, the City of Oakland and the East Bay Regional Parks. For more information please visit our website at http://www.oaklandzoo.org