Fuserashi International Technology celebrates its 20 year anniversary at the Rock & Roll Hall of Fame. Recognizing their dedicated employees and award-winning achievements, the company remembers their milestones, while looking toward an even brighter future. 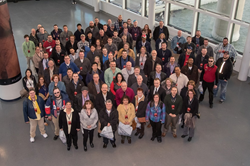 F.I.T., Inc. employees at the Rock and Roll Hall of Fame

As we continue grow, we want to be leaders in the community and participate in many local initiatives.

In celebration of its 20th anniversary, F.I.T. shut down production for one day last month and transported employees to the Rock & Roll Hall of Fame Museum in Cleveland. The event was intentionally intimate, focused solely on employees. Company president, Mamoru Shimada, attended along with nearly 100 company associates. The museum was reserved for the event, including private tours, dinner, and a movie highlighting the company’s evolution since 1997, displaying pictures of the facility’s expansion over the years.

In addition to its 20 years in business, F.I.T. celebrated its significant growth from a small to large organization, specifically over the last three years. In 1997, the company started with one employee and grew to seven employees in the same year. Since then, F.I.T. has reached 95 employees, and plans to surpass 100 in 2017.

When F.I.T. first opened, it was manufacturing three parts and has since expanded the complexity of its product line, which includes diversifying and adding more safety sensitive parts. The company has also been recognized with over 70 awards for success in quality, delivery, or cost. Amongst its honors, F.I.T. received the 2016 Honda Excellence in Quality Award for 2016 performance. Additionally, F.I.T. provided Honda 100,000,000 parts with zero defects, over a three-year period. In addition to a focus on excellence, the company’s success has largely been driven by the high demand for quality localized products.

Regarding the future of the company, HR Manager Jennifer Connelly shared, “As we continue grow, we want to be leaders in the community and participate in many local initiatives. As a company we hope for continued steady growth this year, as well as the opportunity for more diversification of our parts.”

Established in February of 1996, F.I.T., Inc. is the first international subsidiary of Fuserashi Co., Ltd. Fuserashi is a Japanese manufacturer of hot and cold formed precision metal products and fasteners, primarily for various vehicle applications, with a tradition of quality, service, and performance. Since opening its doors over 20 years ago, F.I.T. has more than quadrupled its footprint, both in terms of facility size and equipment. With four major plant expansions, substantial employee growth, and an accelerating customer base, F.I.T. continues to innovate in its field.