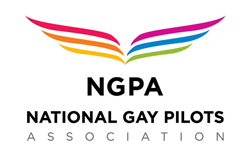 “Wings Financial is one of NGPA’s founding corporate partners, and we’re excited to continue to build upon that years-long relationship with this agreement.” said NGPA Executive Director David Pettet. “In addition to the benefits it provides our Association, it’s also a very clear sign of the forward-thinking corporate values and philosophy Wings Financial espouses. Needless to say, we’re proud to be associated with such a LGBT-inclusive organization.”

“Wings Financial is pleased to expand our support of NGPA through our presenting sponsorship of this year’s NGPA Cape Cod Classic,” said Grant Walker, Wings Vice President – Business Development. “We proudly support NGPA in its mission to foster diversity in the aviation industry and beyond, and we thank the many members who have supported Wings through their membership over the years.”

In 2017, NGPA received more support from airlines, aviation organizations, and members than ever before in its 27-year history. Since its founding in 1990, donations have supported programs and scholarships to further LGBT equality within the aviation community, education and careers in aviation. This year, NGPA and NGPA Education Fund are pleased to announce that over $100,000 in scholarships will be awarded.

Current sponsors include several airlines, aviation corporations and flight institutions that provide year-round support of NGPA’s mission. The association expanded globally in 2017, and now supports the LGBT aviation community in more than 14 countries and growing.

About the NGPA
Founded in 1990 in Washington D.C., the National Gay Pilots Association (NGPA) is an organization of lesbian, gay, bisexual and transgender (LGBT) pilots and other aviation enthusiasts from around the world. Through education, outreach programs, and social events, the organization encourages members of the LGBT community to begin piloting careers; fosters equal treatment of LGBT aviators through advocacy and outreach; promotes aviation safety, and provides an affirming social and professional network for LGBT aviators. Follow the NGPA on Facebook and Twitter. More information is available via the association’s website, http://www.ngpa.org.

Wings members enjoy some of the nation’s best savings and lending rates, convenient mobile and online access, over 60,000 surcharge free ATMs, and 17 branch locations throughout the Minneapolis-St. Paul metro area, plus offices in Atlanta, Detroit, Orlando and Seattle.

Founded in 1938, Wings membership has grown from serving the employees of a single airline to those working in the U.S. aviation industry nationwide as well as residents of the Minneapolis-St. Paul and Seattle-Tacoma metro areas. To learn more, visit http://www.wingsfinancial.com.