Mayshark’s second book, Academic Betrayal: The Bullying of a Graduate Student, is being released on April 27th, 2017. His book explores the dark corners of higher education in the U.S. from a student's perspective. 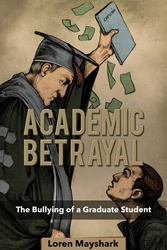 An education is more than a transaction. An education should be about inspiring and enriching.

Loren Mayshark entered Hunter College in 2008 with high hopes of gaining a master’s degree in two years. Six years, two master's theses, and tens-of-thousands of dollars later, he abandoned his studies without attaining the degree. His forthcoming book is an account of his struggles, which is a microcosm of what is wrong with the US higher education system.

Mayshark's first book, Death: An Exploration, published by Red Scorpion Press, was the winner of The Fifth Annual International Beverly Hills Book Awards and has also been recognized as a finalist in the 2016 Foreword INDIES Book of the Year Awards. Finalists will be announced in June.

Mayshark's second book, Academic Betrayal: The Bullying of a Graduate Student, is being released at the end of this month. The book is an extended personal essay by a young man with a dream of becoming a teacher and his journey in pursuit of a master’s degree. Loren Mayshark entered Hunter College in 2008 with high hopes of gaining a master’s degree in two years.

Six years, two master's theses, and tens-of-thousands of dollars later, he abandoned his studies without attaining the degree. Thwarted by haughty professors, an incompetent administration, and ludicrous policies, he nearly lost his desire for learning and his reverence for the educational system.

“I chose Hunter College because of its solid reputation as the finest of the City University of New York (CUNY) schools. But to my surprise, as explained in the book, I experienced one of the worst nightmares a student could encounter. I later discovered that my experience is not unique, and that there are a lot of graduate students across the United States facing similar academic betrayals,” says Mayshark “I am excited to learn that this emotionally-charged tale already seems to be resonating and might bring awareness to the academic problems many students are forced to deal with every day in the US.”

The 163-page book, Academic Betrayal, is published by Red Scorpion Press and will be released on April 27, 2017. It is available on Amazon and most bookstores in the United States and internationally.

Praise for Academic Betrayal: “Well written, Academic Betrayal is a cautionary tale shedding light on the darker side of higher education, the hubris of some educators, and the ‘big business’ focus of universities that have little regard for their most important constituent: the student.” - Patricia Pihl, founder and personal historian at Real Life Legacies (reallifelegacies.com)

"Far from seeming like Mayshark has some sort of vendetta, he lays out his case carefully and meticulously. Academic Betrayal is an interesting and important account because it's a story told from the student's point of view. As such, it is useful for students wondering how to navigate a difficult system, and education reformers looking for ideas from a new perspective." Self-Publishing Review

Loren Mayshark is a young author from Bemus Point, New York. He is a regular contributor to Can the Man, an alternative media resource focused on social justice, and The Jovial Journey, a website dedicated to food, drink, and travel. His upbringing enabled him to travel the world, visiting over 38 foreign countries and four continents.

While living in New York City, Mayshark attended the famed Gotham Writers' Workshop and the prestigious New York Writers Workshop where he was inspired to assiduously learn the craft of writing. He is a 2004 graduate of Manhattanville College where he earned a BA in World History. Mayshark also attended the MA History program at Hunter College. He has written for the Permaculture Research Institute and Uisio among other prominent outlets.

For media inquiries regarding, Death: An Exploration and Academic Betrayal: The Bullying of a Graduate Student. Individuals are encouraged to contact Author, Loren Mayshark, directly at (631)678-1530 or via email at mayshark.lj@gmail.com. To learn more about the books or author, please visit http://www.lorenmayshark.com or on Twitter he can be found @LorenMayshark