Breaking out onto the music scene, teen singer-songwriter JoAnna Michelle prodigiously plays drums, keyboards, and guitar. Supported by music industry award-winning producers, Joanna Michelle will release “Too Sophisticated” complimented by top-notch dance remixes and a music video this May. 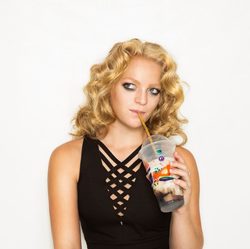 Haters are everywhere and they hide behind computer screens as INTERNET TROLLS!” adds JoAnna. “I stand up and dance around bullies and I hope 'Too Sophisticated' inspires others to do the same.

Forging her way into the hearts, minds, and smart phones of Generation Z teens and music lovers everywhere, singer-songwriter musician JoAnna Michelle is poised to become the world’s next top youth influencer. After her success with debut singles and videos for “My Snap Story” and "Entourage (I Am My Own)," JoAnna is now emerging from more than a year in the studio with internationally acclaimed producer Josh Harris, with a maturing resonance and chic sound. JoAnna—a true child prodigy—has created the ultimate goal of creating art and telling stories that will make people feel good and happy inside. With the production genius of award-winning producers Josh Harris, Dave Audé, and Moto Blanco, JoAnna’s breakout dance single “Too Sophisticated,” when released in May, is guaranteed to pack club floors and gain her new fans all over the globe.

"Working with Josh Harris in the studio has been an amazing process. I am grateful to Jimmy D Robinson for hooking this collaboration up,” states JoAnna Michelle. “We are now ready to unleash 'Too Sophisticated.' My fingers are crossed that DJs and fans will vibe with it."

“Too Sophisticated” is written by JoAnna and is a song about facing the bullies and haters— bullies who are at school, on the Internet, and in the workplace.

“Haters are everywhere and they hide behind computer screens as INTERNET TROLLS!” adds JoAnna. “I stand up and dance around bullies and I hope this song inspires others to do the same.”

In a time where many up-and-comers are emulating Britney Spears and Selena Gomez, JoAnna Michelle’s artistic presence and style is uniquely influenced by such artists and bands as Stevie Nicks, The Beatles, Styx, The Rolling Stones and many other classic rock legends. Of today’s artists, JoAnna gets inspiration from Bruno Mars, Drake, Rihanna, and Niki Minaj. This unrivaled musical brew ignites JoAnna Michelle’s fiery style, clearly categorizing her as a fearless and powerful trailblazer. Icon status is imminent.

"Working with the talented JoAnna Michelle and helping to guide her development as an artist is exciting and so rewarding,” states producer Jimmy D Robinson. “This girl is a powerhouse singer, songwriter, and musician and it won't be long before JoAnna’s name is wagging on everyone's tongues. JoAnna truly has that 'je ne se quois'...that fabulous IT factor!"

Hot off a recent performance at Rock Island Live in Wichita, Kansas, JoAnna helped raise money for the School of Rock Scholarship Fund. Coming this May, JoAnna will be performing at several local Wichata events, including gigs with her local band Dorothy’s Revenge, in which she plays drums, keyboards, guitar, and sings. A crowd favorite, Dorothy’s Revenge performs '70’s and '80’s pop tunes featuring Boston and Styx songs. Solo dates are currently being set up and audiences will be astonished with JoAnna’s high-energy shows, where she jumps from instrument to instrument and performs exciting choreography with the hottest back up dancers.

ABOUT JOANNA MICHELLE
JoAnna is a rare breath of musical and performance authenticity in today’s over-produced, hyper-digitized music scene. A native of Wichita, Kansas, she spent the majority of her childhood studying and emulating hundreds of artists of both past and present generations, appreciating and “sponging” everything from southern rock to hip hop, country/western to pop, rock to rap, and everything in between. Having started ballet and tap lessons at the age of four, it soon became very clear that music, dance and performance are her passions. As early as first grade, JoAnna began piano lessons, and has since become a true multi-instrumentalist - proficient at drums, guitar, keyboards, and vocals. While developing her musical abilities, she has also continued to pursue dance studies, focusing on hip hop, ballet, modern, jazz, and tap. After years of studying and emulating others, JoAnna has found her own voice, and made her worldwide debut in 2016 with her break-through single, “My Snap Story.” Her second single "Entourage (I Am My Own)" was released in October of 2016. The inspiration for "Entourage" was the recent experiences while breaking into the music industry. She plays the drums on the "Entourage" track as well as lead vocals. JoAnna loves to be on stage performing in front of people, connecting with her audience and fans. This up and coming young artist is excited to begin her musical journey, and take you along for the ride. Stay tuned.

For more information on JoAnna Michelle and her upcoming performances, please visit her website at http://www.joannamichellemusic.com.