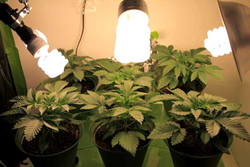 These six small cannabis plants were grown in a spare closet under cheap fluorescent light bulbs, which many potential growers may already have around the house.

Trump's signing statement has no legal power, but it sends a strong message about his priorities on federal cannabis enforcement. We must get accurate growing information into as many hands as we can to protect those with a state-legal right to marijuana.

The Trump administration has previously indicated through Attorney General Jeff Sessions that increased federal enforcement of cannabis laws may be coming to the U.S, though there has been no known subsequent increase in prosecutions against individual growers and patients since Trump's inauguration.

On Friday, Trump signed a $1 trillion spending bill to fund the US government through September, a bill which prohibited the Justice Department from spending taxpayer money on medical marijuana enforcement in states where its use has been legalized.

Although considered a win for the cannabis legalization movement, in a signing statement immediately afterwards, Trump indicated he's not legally bound to federal spending limits imposed by Congress. His statement indicates that the president is not held to the Congressional bill he just signed in regards to the federal ban from interfering with state medical marijuana laws.

The author of the guide, who goes by the pseudonym Nebula Haze, explains her motivation, "Trump's signing statement is alarming, but I don't think there's a need for patients to panic yet. So far there is no evidence the federal government plans to specifically target individuals for marijuana offenses, and the feds have typically not spent a lot of resources on non-selling individuals even at the height of the drug war. That being said, while it's good to take a wait-and-see approach to further federal legalization, at GWE we believe that we should act like legalization in all forms may be taken away. We must put growing information into the hands of those who may be affected by shutdowns, so that safe access to cannabis continues for those who are legally able to use cannabis under local laws, even if the federal government starts cracking down on supply chains."

The guide has simple instructions on how to grow just a few small pot plants in a closet or spare bedroom, in contrast to their more comprehensive Growing Cannabis at Home Basics Guide. The guide includes information on how USA residents can get safe access to cannabis seeds online, as well as a community to ask real growers for help.

Haze offers words of advice for future growers, "Even though there's no evidence yet of increasing crackdowns on individual growers, remember the mantra that prevents 99% of growers from arousing suspicion from neighbors or law enforcement, 'Don't tell, don't sell, don't smell.' Until cannabis is legalized on a federal level, it's important to remember your state laws only offer a small amount of local protection, and act accordingly!"