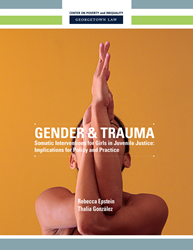 Trauma-informed yoga is a powerful tool to help girls build a brighter future.

A report released today by Georgetown Law’s Center on Poverty and Inequality calls for specialized yoga programs to be offered widely to girls in the juvenile justice system amidst growing evidence that they can help them overcome the harmful effects of pervasive childhood trauma.

The first-of-its kind report – which draws on original pilot studies in Pennsylvania and Connecticut, an extensive literature review, and interviews with experts and girls around the country – finds that tailored forms of yoga and mindfulness programs can be uniquely effective in supporting traumatized girls.

Children in the juvenile justice system have experienced disproportionately high rates of childhood trauma, which has long-term harmful effects on physical and mental health. Girls in the system are more likely than boys to have experienced all forms of abuse – but particularly sexual violence.

“Girls in the juvenile justice system deserve support in healing and overcoming the devastating effects of childhood trauma that so many of them have experienced,” said lead author Rebecca Epstein, executive director of Georgetown Law’s Center on Poverty and Inequality. “Trauma-informed yoga is a powerful tool to help girls build a brighter future.”

Studies have shown that:

The Georgetown Law report finds that the proven benefits of yoga are well- positioned to mitigate the unique effects of trauma on girls. For instance:

The report emphasizes that yoga interventions should be trauma-informed and gender-responsive to be successful in the juvenile justice system. That can include instructors using invitational language to allow girls to feel in control of their practice, asking permission before engaging in physical contact and not approaching girls from behind.

Pilot studies conducted by Georgetown Law’s Center on Poverty and Inequality and results from programs in the juvenile justice system showed that after girls practiced trauma-informed yoga, they:

Additionally, the report finds that trauma-informed yoga is cost-effective and sustainable. It cites successful and innovative regional programs developed in Palo Alto, Calif. and Brookline, Mass.

In order to have the greatest impact on girls in the juvenile justice systems, the reports’ authors provide these recommendations:

“Yoga is already helping girls in custody manage their emotions, build resilience and recognize the potential they have to improve their own lives,” said Thalia González, the report’s coauthor. “By expanding the reach of these powerful, low-cost programs, the juvenile justice system could help many more struggling girls overcome the harrowing pasts they have endured.”

Georgetown University Law Center is a global leader in legal education and the preeminent U.S. law school based in the nation’s capital. More than 20 centers and institutes forge cutting-edge research and policy resources across fields including health, the environment, human rights, technology, national security and international economics. Georgetown Law equips students to succeed in a rapidly evolving legal environment and to make a profound difference in the world, guided by the school's motto, “Law is but the means, justice is the end.”