Fifty-Five Percent of Parents Who Took Out Loans For Kids’ College Owe $40,000 or More

A new survey by Student Loan Hero finds parents who borrowed or cosigned on student loans for their children often jeopardize their own finances in the process. 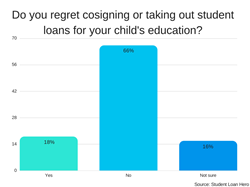 It’s crucial for parents to carefully consider how helping their children pay for school will impact their own financial well-being. Sacrificing years of hard work and retirement savings just isn’t worth it.

The impact of rising student loan debt on today’s young college graduates is inarguably detrimental. One in seven Americans have delayed marriage due to student loan debt, while one in four had to postpone moving out of their parents’ homes.(1)

However, parents of these college students are just as negatively impacted, according to the latest survey by Student Loan Hero. The amount of debt parents report they have taken on, either through loans in their own name or by cosigning, often exceeds the average balance for Class of 2016 graduates:

“It’s natural for parents to want to help out their children in any way possible, including covering the enormous cost of a college education,” said Andrew Josuweit, CEO of Student Loan Hero. “However, it’s crucial for parents to carefully consider how helping their children pay for school will impact their own financial well-being. Sacrificing years of hard work and retirement savings just isn’t worth it.”

Eighteen percent of parents surveyed regret taking out or cosigning loans for their child’s education.

Sixty-four percent of respondents have not considered having children refinance student loans into their own name; 16 percent were not aware this option exists.

Thirty-six percent of respondents said they would likely refinance their own loans if interest rates were expected to go up in the next year.

Fifty-six percent of respondents claimed they were not familiar with or aware of student loan repayment options such as Public Student Loan Forgiveness, income-contingent repayment, cosigner release, or refinancing loans into child’s name.

Seventeen percent of respondents claimed to be aware of the “Obama Student Loan Forgiveness” program – which is not a real student loan forgiveness program.

Survey was conducted via Google Consumer Surveys on behalf of Student Loan Hero on April 5-9, 2017, with a nationally representative sample of 1,001 adults living in the United States. “Are you currently making payments on student loans you cosigned for or took out for your child(ren)'s education?” was used as a screening question (with a target answer of “yes”).

Student Loan Hero combines easy-to-use tools with financial education to help the millions of Americans living with student loan debt manage and pay off their loans. Student Loan Hero has helped more than 150,000 borrowers manage and eliminate over $3 billion in student loan debt since 2012 and assists over 3.5 million people in becoming more financially healthy every year.

Student Loan Hero offers both current and former students free loan calculators, as well as unbiased, personalized advice and repayment plans through an easy-to-use online dashboard.
Founded in 2012 by CEO Andrew Josuweit, who himself had over $100,000 in student loans, Student Loan Hero operates on the belief that all loan help and recommendations should come with honesty and no hidden agenda.