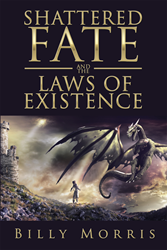 Author Billy Morris was looking for an idea for his next novel, when he decided to define an unlikely hero or an anti-hero. He then built a fantasy world around the actions of the world’s most powerful warmonger and a young female witch as she discovers the extraordinary destiny that connects the two of them.

In his new novel, “Shattered Fate and the Laws of Existence,” Morris dives deep into the fantasy world of dragons, warmongers, and magic. Angelina, a young witch, is pulled into a war to defend her kingdom as the warmonger Haden prepares his armies to invade Utopia.

“The book is centered around everyone’s reaction to Haden the most powerful warmonger on the planet and the conquest of this doomed world,” said Morris. “The story blends many types of magic and multiple villains vying for more power.”

Morris’s last novel, “A Time Not Yet Forgotten A Time Before Hope,” was also in the fantasy genre. With his new novel, Morris was looking for an anti-hero to take on a journey.

“I was looking for an idea for my next novel, and I wanted to write a story with an unlikely hero or someone who I would consider an anti-hero,” said Morris. “I think fantasy is a great setting for an anti-hero, and it was just the challenge I needed.”

In “Shattered Fate and the Laws of Existence,” readers will hang on to Morris’s words as they read to discover Angelina’s fate. Will she survive? Will the world survive?

About the author
Bill Morris was an aircraft mechanic for 15 years with the U.S. Air Force and a contract specialist for nine years. He currently lives in Virginia and works in Washington D.C. He writes in his spare time and hopes to finish a novel at least once a year. For more information about the author and his book, please visit: http://www.bmorris69.com