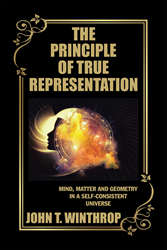 A Montana-based physicist has released his debut account of the origin and structure of physical law. In “The Principle of True Representation,” John T. Winthrop sheds light on the widely accepted doctrine of philosophical materialism and, using criterion of scientific truth, delineates how it is demonstrably false.

Winthrop’s book presents both known and new physical laws that arise from the metaphysical demand for exact correspondence between fact and representation, which he refers to as “True Representation.”

“True Representation allows entry into seemingly disconnected disciplines like particle theory, gravitation and consciousness studies,” Winthrop said. “This singular principle draws them into a comprehensive whole, where they may be approached separately in detail even by a non-specialist, such as myself.”

“… the heart of Winthrop’s provocative argument is that physicists must open themselves up to philosophical reasoning to advance their discipline,” a Kirkus reviewer wrote about the book.

In “The Principle of True Representation,” Winthrop examines physical law through a fresh lens and resolves several open problems in physics, cosmology and neuroscience.

About the author
John T. Winthrop holds a doctorate in physics with a focus on X-ray holography and optical self-imaging. With much of his career devoted to designing varifocal lenses, he holds multiple ophthalmic design patents. Winthrop currently resides in Stevensville, Mont. To learn more, please visit http://www.principleoftruerepresentation.com.