Shows the determination of humans to fight for survival 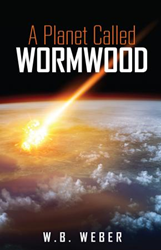 There is a survival instinct deep within every living thing

W.B. Weber’s new book A Planet Called Wormwood ($25.49, hardcover, 9781545602393; $15.49, paperback, 9781545602386; $7.99, E-book, 9781545602409) a meteor hits earth, which seems unreal, but that is what was first believed when a supposed meteor hit Buenos Aires, Argentina. However, as investigations begin, the findings show that it was a small planet hitting Earth, and there is more to come with this disaster in W.B. Weber’s new science fiction novel, A Planet Called Wormwood. After the meteor/planet hit, changes start happening to several people not only in Argentina, but also in the United States. People are noticed as displaying animal-like behavior, with people attacking people for no reason and in violent ways similar to animal attacks. The survivors of Earth realize and infestation on Earth has taken place and time is running out on supplies, gas, and lives in general. The multiple characters storyline in A Planet Called Wormwood illustrates a survivor’s story of hope, faith, and the resilience of the human spirit.

W.B. Weber wrote this novel from a deep understanding of fighting for something you believe in with all of your heart.

Xulon Press, a division of Salem Media Group, is the world’s largest Christian self-publisher, with more than 12,000 titles published to date. Retailers may order A Planet Called Wormwood through Ingram Book Company and/or Spring Arbor Book Distributors. The book is available online through xulonpress.com/bookstore, amazon.com, and barnesandnoble.com.