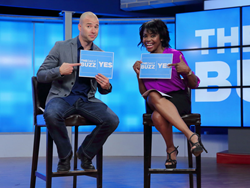 Lance Smith and Kia Malone will host The Daily Buzz.

The fast-paced, one-hour program will return in its original format featuring celebrity interviews and profiles, gossip, and news-you-can-use that integrates paid publicity content covering a wide variety of verticals including consumer, fashion, finance, health, hospitality, sports, travel and many others.

The new Buzz will be overseen by its original creative and production team working out of the show’s Orlando, Florida studio with correspondents in New York, Los Angeles and Atlanta.

The Daily Buzz will initially return as a weekly program airing nationwide in addition to appearing on multiple digital channels with regular daily updates. As the new version of the Buzz rolls out, additional broadcast and digital platforms will be added.

KEF Media, a pioneer in broadcast and digital public relations, acquired The Daily Buzz trademark and is providing integrated content for the program.

“The Daily Buzz is the gold standard of combining news, hot topics and integration in a fun, seamless format,” said KEF Media COO Yvonne Hanak. “We’ll be including a wide range of paid content while offering other exciting program integration opportunities.”

For more information about The Daily Buzz, contact info(at)thedbztv(dot)com.