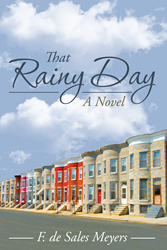 “That Rainy Day” shares the poignant tale of a young woman’s coming-of-age journey as she strives to deal with the losses of life’s unfortunate twists and turns. The novel chronicles the life of a young woman, Veronica Adamo, who becomes ensnared with the tragedy of her mother’s mysterious death.

Inspired by his intellectually challenged nephew, the plot takes place in de Sales Meyers’ hometown, Baltimore. In what has been described as a lyrical drama, de Sales Meyers’ novel captivates readers as it highlights the importance of managing personal challenges, as well as the appreciation of relationships.

Readers will be easily drawn in as de Sales Meyers emphasizes the importance of music in life and overcoming personal challenges throughout the novel.

About the author
F. de Sales Meyers earned a Bachelor of Science degree and National Key from the School of Journalism at Boston University. After serving in the navy during World War II, he worked for the state department in the Public Information Office of the Department of Health and Hygiene. “That Rainy Day” is his debut novel.