The new west coast home for IRONMAN looks forward to a season of outdoor activities for fitness buffs of all levels. 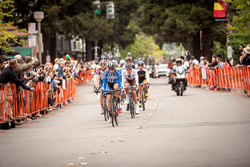 Kicking off the season of health and wellness is the IRONMAN 70.3 on May 13. Its finish line is downtown Santa Rosa’s newly renovated Courthouse Square, marking the first major event for the reunified landmark.

Visit Santa Rosa, tourism bureau for Sonoma County's biggest city, gears up to ready to get active with a host of new and returning spring and summer races and activities, for every level of athlete, from professionals to families looking for fun. Kicking off the season of health and wellness is the IRONMAN 70.3 on May 13. Its finish line is downtown Santa Rosa’s newly renovated Courthouse Square, marking the first major event for the reunified landmark. With stunning views and varied terrain, these new and returning events highlight Santa Rosa as the perfect travel destination for fitness enthusiasts and their families.

Here are eleven active adventures worth the trip:

IRONMAN Vineman 70.3 - May 13, 2017 - This year, the beloved Sonoma County race moves from Windsor to its new home in Santa Rosa, preserving the best parts of the iconic event and improving the overall athlete experience and the lively post-race celebrations. The 70.3 race begins with a 1.2 mile swim in Lake Sonoma, then transitions to a 56-mile bike ride south to Santa Rosa, where the City of Santa Rosa hosts a half-marathon run along the Santa Rosa Creek trail to the triumphant finish line in Courthouse Square, where spectators and participants can celebrate with local food, wine and beer.

IRONMAN Santa Rosa - July 29, 2017 - The full Ironman follows a similar course to the half (70.3), with the finish line celebration at Courthouse Square lasting until midnight. Information about both races can be found here: http://www.ironman.com/triathlon/events/americas/ironman/santa-rosa

Santa Rosa Marathon - August 27, 2017 - The Santa Rosa Half and Full Marathons are USA Today Sports Active Alliance Top 10 races that take runners through the Sonoma County countryside, the city of Santa Rosa, and the Prince Memorial Greenway. This year, for the first time ever, runners can receive personal online coaching from Ryan Hall, retired long distance runner who holds the U.S. record in the half marathon. The races conclude at the 4th Annual Ready Set Growl Beer Festival, which features more than 25 breweries and food from local vendors. On August 26, there are also family-centered 5K and 10K walk/runs offered, with Peanuts characters participating. https://www.thesantarosamarathon.com/

Sonoma County Backroad Challenge - May 20, 2017 - Just south of Santa Rosa, this event begins at Penngrove Park and teams depart on three different courses (Century, Metric Century and a Half Metric), each leading cyclists along the scenic backroads of Sonoma and Marin counties. The event concludes with a festival of delicious barbecue, local craft beers, and live music. https://backroadchallenge.com

GiroBello - June 24, 2017 - Since 2010, the Rotary Club of Santa Rosa hosts this annual event, with 100% of net proceeds benefitting youth in Sonoma County and internationally. With three rides (Century, Metric Century and a Family Fun Route), these rides cover beautiful and varied terrain throughout Northern and West Sonoma County. http://girobello.com/

The Water Park at Spring Lake - May 27 through September 4, 2017 - Returning for its second year, the floating Water Park features inflatable bounce islands, bridges, climbing cliffs, trampoline, balance beam and other play stations for children 6 and older and adults. Spring Lake Regional Park is Santa Rosa’s 320-acre park featuring trails for walking, hiking, bicycling and horseback riding as well as a summer swimming lagoon, a lake for boating and fishing, a campground, picnic areas, and the Environmental Discovery Center. http://parks.sonomacounty.ca.gov/Get_Outdoors/Parks/Spring_Lake_Regional_Park.aspx

Vineyard Adventure at La Crema Estate at Saralee’s Vineyard - ongoing - This is a brand new 1.1 mile self-guided walking trail through the scenic La Crema property in the Russian River Valley. Established in partnership with the Sonoma County Winegrowers, it is is a wonderful way for the whole family to get outside and enjoy learn about winegrowing and other aspects of a working farm. The walk is free and maps are available in the tasting room. Guests 21+ are encouraged to visit the tasting room after the walk to savor wines made from the vines they’ve just walked amongst. http://www.lacrema.com/la-crema-at-saralees-vineyard-new-estate/

The Sonoma Wine Country Games - June 2-18, 2017 - Encouraging healthy activity and social engagement for anyone 50+, competitions are offered in sports including bocce, golf, basketball, cycling badminton, and more. Festivities include a Celebration of Athletes dinner with wine on June 10 at Shone Farm. http://www.winecountrygames.com/

Located 55 miles north of San Francisco, Santa Rosa, California is the happening hub for all there is to see, do, eat, drink, hike, bike and explore in Sonoma County. Santa Rosa is the biggest city in Sonoma Wine Country, but the vibe is as welcoming as a small town. Central to Sonoma County’s 400+ wineries, Santa Rosa is also just 30 minutes from the stunning coast and even closer to California’s majestic redwood trees. Home to an impressive array of world-class restaurants and breweries, some of the best bicycling routes in the U.S., the Charles M. Schulz Museum, Luther Burbank Center for the Arts – and so much more – Santa Rosa has a little something for everyone.

Visit Santa Rosa is a partnership with the Santa Rosa Metro Chamber, providing assistance to visitors and groups seeking information about lodging, dining and entertainment opportunities in Santa Rosa. It also operates an Official California Welcome Center and helps to bring major events to Santa Rosa, such as the Amgen Tour of California. For more information, call (800) 404-7673 or (707) 577-8674 or visitsantarosa.com.