Weeks before Trump even took office, Silicon Valley company, Unanimous A.I., was challenged to predict the President’s approval rating at the 100-day mark. They nailed it. 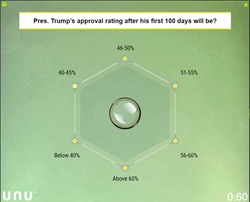 What makes this prediction by Unanimous A.I. notable is that it was generated weeks before Trump even took office.

Unanimous A.I. is known for accepting challenges from journalists, testing the power of their technology across a range of venues, from predicting the winners of the Presidential primaries, to picking the top finishers of the Kentucky Derby. The latest challenge was from Modern Trader magazine, which asked the Silicon Valley company to predict President Trump’s approval rating at the 100-day mark. What makes this prediction notable is that it was generated weeks before Trump even took office. The published prediction made by Unanimous A.I. was for a 42% approval rating — the exact figure reported this week by the latest Washington Post-ABC News poll.

Unanimous made this prediction by building a “Swarm A.I.” system that combines real-time human input with artificial intelligence algorithms, thereby optimizing the combined knowledge, wisdom, insights, and intuition of the target population. Remarkably, instead of polling thousands of people over a period of weeks, Unanimous’ Swarm A.I. forecast was generated in under 20 minutes using only 75 participants, each of them recruited online.

Swarm Intelligence, the science behind this technology, is a biologically inspired process that goes back to the birds and the bees. In fact, it goes to all social creatures that amplify their group intelligence by forming flocks, schools, colonies, and swarms. Across countless species, nature show us that groups, when working together as closed-loop systems, can produce collective insights that greatly exceed the intellectual abilities of individual members. While humans have not evolved this ability naturally, Unanimous A.I. algorithms are now being used to enable it artificially, allowing groups of people to amplify their intelligence by forming real-time swarms.

The most well-known example of harnessing Swarm Intelligence among human groups happened last year when Unanimous was challenged by CBS Interactive to predict the Kentucky Derby, not just the winner but the first four finishers in exact order. In horseracing, this is called the Superfecta and last year it went off at 542-to-1 odds. Unanimous made the prediction by tapping the intelligence of only 20 horse racing fans, their insights combined in a Swarm AI. The prediction was perfect. As reported by Newsweek, anyone who put $20 on the Superfecta prediction won $11,800. One lucky reader won $50K.

“It’s exciting that the Swarm AI system was able to accurately predict President Trump’s 100-Day Approval Rating so far in advance," said Dr. Louis Rosenberg, founder of Unanimous A.I. "It’s a testament to how much latent intelligence resides in the public consciousness. We’re pleased to have been able to harness it so effectively.”

This is not the first prediction Unanimous has made regarding President Trump. The company accurately forecast his nomination during the GOP primaries, long before the polls had him on top. Unanimous also predicted Trump would be Time Magazine’s Person of the Year, even when polls were predicting India’s Prime Minister, Modi.

About Unanimous A.I.
Unanimous A.I. is the Silicon Valley startup that pioneered Artificial Swarm Intelligence, a powerful form of A.I. that amplifies human intelligence by combining real-time human insights with A.I. algorithms. Modeled after swarms in nature, Swarm AI™ technology from Unanimous has an impressive track record for making accurate predictions and was recognized among Tech Republic's 6 most exciting AI advances of 2016. It was also among the Top 10 Tech Trends Transforming Humanity by Peter Diamandis. The BBC recently featured Swarm A.I. and its potential: Why Bees Could be the Secret to Superhuman Intelligence. To learn more, visit http://unanimous.ai