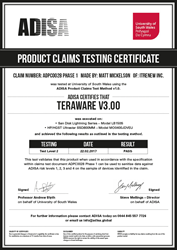 Teraware has passed the most stringent, forensic-level testing on the latest and greatest storage technology that is prevalent within data centers and throughout the IT enterprise of Fortune 500 businesses. We feel the results speak for themselves.

ITRenew, an industry leader in IT asset disposition (ITAD), data security and data center decommissioning services, today announced that its Teraware data erasure platform has again passed the ADISA Claims Test process. Teraware is the only software to have passed Test Level 2 of the ADISA Threat Matrix for the sanitization of both solid-state drives (SSDs) and hard disk drives (HDDs) beyond forensic recovery. With 17 active ADISA claims tests in total, ITRenew Teraware holds more certificates than all other products combined.

“This latest round of ADISA testing revalidates Teraware’s position as the de facto solution for enterprise-grade data sanitization,” said Aidin Aghamiri, vice president of corporate strategy at ITRenew. “Teraware has passed the most stringent, forensic-level testing on the latest and greatest storage technology that is prevalent within data centers and throughout the IT enterprise of Fortune 500 businesses. We feel the results speak for themselves.”

In October 2014, ITRenew’s Teraware became the first software certified by the ADISA claims test to erase SSDs at a forensic level. The latest ADISA testing, which was carried out by Professor Andrew Blyth, Head of Information Security at the University of South Wales, validates Teraware’s ability to overwrite both SDD and HDD hard drive data to protect from forensic attack equivalent to Test Level 2 of the ADISA Threat Matrix.

“The ADISA Claims Test enables those companies who provide data sanitization tools to have third-party validation that the claims they make are true,” said Steve Mellings, ADISA CEO. “ITRenew has submitted a larger sample size to the testing process than any other organization.”

“You don’t see high-capacity and helium drives on certification lists for good reason – because they’re far more challenging to erase, particularly at a forensic level,” said Mickelson. “But this is the technology mix our customers have in-production at their data centers, so we wouldn’t be serving their best interests if we were to limit our product testing range. Plus, we’re always up for a good challenge.”

ITRenew will be demonstrating Teraware data erasure software capabilities in Booth #2 at the IAITAM ACE Conference, May 2-4 in Las Vegas. Mickelson will also present It’s Your Data: Erase it When, and Where, You Want on Wednesday, May 3rd at 10:00 AM PST. For more information, read our IAITAM blog post.

About ITRenew Teraware
Teraware has been adopted by the world’s largest cloud companies as the default data erasure solution for enterprise-grade data sanitization. Recognized by Gartner as a competitive differentiator, Teraware guarantees 100 percent sector-verified erasure, has an industry-best 95-plus percent erasure success rate and is used to sanitize more than four million drives a year.

About ITRenew
Headquartered in the heart of Silicon Valley, ITRenew supports the onsite data erasure and data center decommissioning needs of some of the most large-scale, data-rich, security-obsessed organizations on the planet. Our technology-driven approach streamlines traditional ITAD processes to deliver superior data and asset security, value recovery and IT sustainability. ITRenew was designated a Visionary in the Magic Gartner Magic Quadrant for IT Asset Disposition, Worldwide and named to the 2016 Inc. 5000, finishing among the top 10 percent of all ranked companies in gross revenues. To learn more, visit ITRenew.com.