“And I Wanted To Be A Boat Bum” from Christian Faith Publishing author Jim Hawk is the story of Gore Lye and his struggle to honor his Christian values and live a life of darkness. Being an undercover agent is never easy, but it is far more difficult for a Christian. 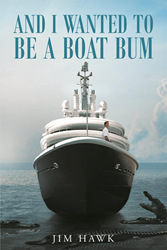 “And I Wanted To Be A Boat Bum”: the story of a lethal undercover agent torn between Christian faith and his profession. “And I Wanted To Be A Boat Bum” is the creation of published author, Jim Hawk, an electronics and computer engineer who retired from the Army Civil Service. His early years working for the army included work for the Amy Security Agency, the now defunct Army super secret three-letter agency. Although still a church elder, he has since retired from ten years as a church administrator. He is somewhat of an exercise nut and a backyard mechanic who spent more than twelve years of his life practicing kenpo, hapkido, taekwondo, and boxing. He may have shot, and may even own, some of the guns depicted in his books. He is now enjoying writing Gore's next adventure.

“I only run because it is a necessity. The only bliss I get out of most runs occurs when I fall down into a chair with a cold brew after it’s completed. I’m not a big drinker, but beer, according to those ever present experts, replaces most of the chemicals you lose during a run. A cold brew can also be a very appealing carrot during the agonies of a long run in Phoenix in the summertime.” --Jim Hawk

His name is Gore Lyle. He is six foot, two inches and a lean two hundred pounds. He is an ex-Green Beret and ex-cop who became an undercover agent for the Special Police Undercover Terrorism Force, also known as S.P.U.T.F. He also happens to be independently wealthy thanks to a mob boss. For its part, the mob wants him dead.

He always carries bad memories of Green Beret missions that went terribly wrong. He was a different kind of brutal back then. That is before he found God. Unfortunately, the old Gore is always there in the background, always resurfacing like a bad dream. Working in a dangerous occupation, bad Gore can come in handy at times. He must, however, be kept in check most of the time. For a Christian, it is quite a quandary. Only his weird sense of humor and pleas to God help. Welcome to the life of Gore Lyle.

View a synopsis of “And I Wanted To Be A Boat Bum” on YouTube.

Consumers can purchase “And I Wanted To Be A Boat Bum” at traditional brick & mortar bookstores, or online at Amazon.com, Apple iTunes store, Kobo or Barnes and Noble.

For additional information or inquiries about “And I Wanted To Be A Boat Bum”, contact the Christian Faith Publishing media department at 866-554-0919.