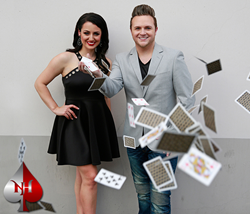 The International Magicians Society is the world’s largest magic organization with over 37,000 members worldwide, and the Merlin Award is the highest award given in the world of magic.

The International Magicians Society announced today that Destin, FL magicians Noah & Heather Wells will take home their third Merlin Award in the past seven years. The International Magicians Society is the world’s largest magic organization with over 37,000 members worldwide, and the Merlin Award is the highest award given in the world of magic. It is to magic what the Oscar is for the movies, the Emmy is for television, and the Tony is for theater. The greatest magicians in the world have received this award. Previous recipients of the Merlin Award include: David Copperfield, Siegfried & Roy, Penn & Teller, Doug Henning, and Criss Angel. This is just a small sample of the greatest magicians in the world who have received the Merlin Award.

The duos highly acclaimed magic show, Maximum Magic, recently moved from its Panama City Beach, FL location to the newly founded Fudpucker's Theater on Okaloosa Island. This new state-of-the-art theater can host up to 125 guests and offers an optional dinner buffet provided by Fudpuckers. The continued evolution of magical skill and technique has won the couple one of the most prestigious titles awarded by the International Magicians Society, “Entertainers of the Year.”

In 2011, Noah was honored with the Merlin Award for "2011 Illusionist of the Year." At the time, Noah was the youngest magician in the USA to ever receive the Merlin Award. The 2011 ceremony brought worldwide attention to the youthful magician. The CEO of the International Magicians Society, Tony Hassini, flew in from New York to personally present the trophy, and soon after Panama City Beach Mayor Gayle Oberst declared May 11th "Noah Wells, Illusionist of the Year, Day." In 2012 Noah did it again, this time not only receiving the coveted Merlin Award trophy, but the Panama City Beach "key to the city", and a letter of congratulations from Florida Governor Rick Scott.

There will be a public awards ceremony with the CEO of the International Magicians Society, Tony Hassini, presenting on Monday, May 8th, 2017 at 6:30pm. This event will take place at the Fudpuckers Theater on Okaloosa Island at 1318 Miracle Strip Pkwy SE, Fort Walton Beach, FL 32548. A regularly scheduled show will follow shortly after the ceremony that is open to the public. Tickets can be purchased by calling 850-424-5125 or by visiting http://www.magicontheisland.com. For all press and media inquiries, please contact Greg Fisher at 850-424-5125 ext 1001.