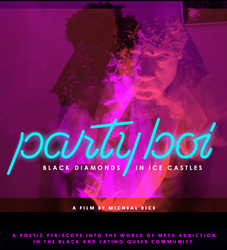 “Reminiscent of the crack epidemic that swept the 1980’s, crystal meth is ravaging minority communities at an alarming rate.” Micheal Rice, Director

New documentary, parTy boi: black diamonds in ice castles, will premiere on May 7, 2017. The film project focuses on methamphetamine addiction within the LGBTQ community of color, and explores a drug epidemic that is affecting the lives of Black and Latino gay millennials at an alarming rate. Directed by Micheal Rice, parTy boi was designed to spark debate and educate LGBTQ youth around the world about crystal meth and drug addiction. The premiere screening and cocktail Q&A event takes place on May 7th at 7:30pm – ImageNation Cinema, 2031 Adam Clayton Powell Blvd. New York, NY 10027. Tickets will be available at the box office window prior to the viewing. Admission: $20.

parTy boi: black diamonds in ice castles features real stories of people who are thinking about using methamphetamine, dealing with the effects of usage, and surviving the drug addiction. In the past four years, Crystal meth once again spread through the streets of New York City like wildfire. Even though the drug has gained newfound popularity with people of color in larger cities, smaller towns are also being disproportionately devastated by the impact of the lethal foe.

“About five years ago, I started to notice new and unfamiliar terminology on social networking sites that target the LGBTQ community, referencing the usage of crystal meth,” says Micheal Rice. “With code words such as ‘Tina’ or ‘T’ floating around in daily social media conversations, many of my closest friends were now abruptly battling methamphetamine addiction.”

The independent film produced by Rice Creative is an untold tale from an urban perspective, and aims to change perception of lifestyle within inner city and rural queer demographics. parTy boi explores how young gay men of color within the five boroughs of New York City suddenly became inundated with opportunities to “parTy & play,” but were quick to discover a future of uncertainty and potential ailments that include: depression, addiction, liver damage, stroke, and psychosis. The cinematic portrayal grants an unprecedented voyeuristic insight into a taboo subject and brings awareness to all points of view.

“Reminiscent of the crack epidemic that swept the 1980’s, crystal meth is ravaging minority communities at an alarming rate,” says Rice. “As an artist, it was imperative for me to speak out and shed light on what’s happening in many urban queer communities throughout America.”

About the Film:
“parTy boi: black diamonds in ice castles” is a poetic periscope into the world of crystal meth addiction in the urban Black and Latino queer community. The film paints a broad and visual, yet harrowing picture of crystal meth addicts in their psychological state and reflection of drug use. parTy boi: black diamonds in ice castles features real stories of people who are thinking about using methamphetamine, dealing with the effects of usage, and surviving the addiction.

The intent is to spark debate and educate LGBTQ youth around the world about crystal meth and drug addiction.

About the Director:
Micheal Rice is a New York City-based creative director, producer, actor and choreographer with over ten years of experience in digital film production, theatre and choreography. Rice has worked a slew of mediums that include directing & choreography for Off-Broadway, regional and international tour shows, along with music videos, indie shorts, documentaries and commercials. Rice has worked with several networks and production companies/agencies including BET, Logo, IMG, Lynch-Dyson entertainment, WME and Plaza 7 agency developing and producing content for web & television series.