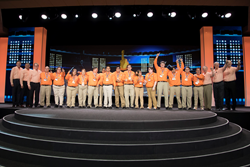 We've heard feedback that our Family Members love being able to improve their teamwork and leadership skills in a fun, competitive environment, said Rob Rodriguez, senior vice president of restaurants for Whataburger.

Whataburger is proud to announce that after competing against more than 800 Whataburger locations in an intense series of elimination rounds for the past six months, three restaurant teams and three maintenance teams were named champions in a ceremony this weekend. Among restaurant teams, Whataburger Unit 4 located at 510 S. 14th St. in Kingsville took home the Gold Medal, Unit 751 located at 2000 State Highway 26 in Grapevine took home the Silver Medal, and Unit 839 at 2203 E. Evans Road in San Antonio won the Bronze Medal. Maintenance Games Competition medalists include:

Combined, the champion teams take home winnings from a pool of more than $200,000 in cash prizes to share with team members who stayed behind to manage restaurants while their coworkers represented them in the competition in Grapevine, Texas. Restaurant finalist teams are made up of 15 competitors, and maintenance teams are made up of four competitors. Each member of Gold Medal-winning teams receives $5,000, each Silver Medal team member wins $2,500, and each Bronze Medal team member wins $1,000. Additionally, all Whataburger employees (known as Family Members) at the winning restaurants receive 10 percent of the finalist prize amount; $500, $250 and $100, respectively.

Whataburger maintenance service technicians also competed in regional teams for medals and cash prizes in the Maintenance Games Competition, where teams participated in a variety of challenges including a hands-on competition where each team troubleshoots and repairs equipment in the restaurant. This portion of WhataGames is designed to reinforce the quality of maintenance work by testing service, productivity, organization and knowledge.

WhataGames is famed in company culture, and going home with the Gold Medal brings winners the ultimate in prestige. The goal of the competition is to help Family Members improve their operational knowledge and skills in in three categories: operations, corporate history and customer service. All the more than 800 Whataburger restaurants companywide started out in the competition, before being narrowed down to 121 semifinalists. Then 23 finalist teams competed in Grapevine, Texas, where finally three winners took the Bronze, Silver and Gold categories.

"We've heard feedback that our Family Members love being able to improve their teamwork and leadership skills in a fun, competitive environment," said Rob Rodriguez, senior vice president of restaurants for Whataburger. "It's been so inspiring watching the competition expand over the years, and it's been especially great seeing how it's helped our company grow and better serve our customers. We're extremely proud of each team who participated in this year's WhataGames, and want to congratulate the three winning teams for bringing home the W to their restaurants."

WhataGames started in 1996 as a training exercise hosting 500 people, and has now become the feature event during the Whataburger Family Convention with over 2,200 attendees. Whataburger's Family Convention is a companywide get-together that takes place every two years in Grapevine, Texas. It brings together employees from all over the 10-state restaurant footprint, including corporate and regional representatives, franchisees, suppliers and the national WhataGames finalists and Maintenance Games Competition finalists.

ABOUT WHATABURGER:
Whataburger has focused on its fresh, made-to-order burgers and friendly customer service since 1950 when Harmon Dobson opened the first Whataburger as a small roadside burger stand in Corpus Christi, Texas. Dobson gave his restaurant a name he hoped to hear customers say every time they took a bite of his made-to-order burgers: "What a burger!" Within the first week, people lined up around the block for his 25 cent, 100 percent beef burgers served on five-inch buns. Today, the company is headquartered in San Antonio, Texas, with more than 800 locations in 10 states with sales of more than $2 billion annually. Visit http://www.whataburger.com for more information.