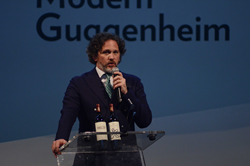 For the 9th edition of Ornellaia’s Vendemmia d’Artista art project, which was launched in 2009 to showcase the marriage between the world of contemporary art and fine wine, the iconic Bolgheri-based estate is proud to announce that $112,500 USD has been raised to celebrate Ornellaia 2014 ‘L’Essenza.’

To artistically interpret Ornellaia 2014 ‘L’Essenza,’ Brazilian artist Ernesto Neto turned to his current field of art research, shamanism as science, natural phenomena, and the artisanal arts that are the collective fruit of the community. In 2014, Neto and the members of the Huni Kin tribe in Brazil undertook a series of artistic collaborations that analysed shamanic rituals and traditions. The spiritual life of that tribe, their striving for healing in harmony with nature, and the wisdom and serenity that they draw from their intimate bond with the energy of our earth infused into Neto’s oeuvre an unprecedented awareness of the power of nature and of the dynamic factors that regulate it. Drawing generously from these traditions, and from the shamans and their rituality, the artist’s recent works convey aspects of transformation and add multiple layers of meaning to his research into social-and ecology-based connectivity.

“We are talking about a wine, a sacred juice that comes from the plants,” explained Ernesto Neto. “I thought about time, the time of the cycles of the wine. In this time that we are living so speedily, wine is slow, because it is nature and nature is slow. Nowadays I see trees as a civilizing entity, one hand in complete darkness, and another hand in complete light; in the middle the trunk, the fruits, the seeds - all of it coming from dark and from the light. This drawing is a kind of old drawing of mine; I have done many of these drawings, thinking about time, about cycles, how somethings begin, then comes back to the beginning; the end and the beginning kissing each other.”

For Ornellaia’s Vendemmia d’Artista project, Ernesto Neto sought to convey the concept of natural balance as it is exemplified in our modern societies. He encapsulated 100 large-format bottles with an interwoven mesh, specifically 100 3-litre double magnums, 10 6-litre Imperials, and a single 9-litre Salmanazar, which together represent a social hierarchy with a single King, 10 Nobles, and a populace of 100 subjects, and in so doing illustrates the equilibrium that should reign in every community, with a hierarchy that is necessary so that all can live in harmony within the group and in uniformity with Mother Nature.

In addition, Neto designed a special label for the 750ml bottles of Ornellaia, and one bottle bearing that label will be included in every 6-bottle wood box.

For Axel Heinz, Ornellaia’s Director and Winemaker, the 2014 vintage exhibits the character of ‘L’Essenza,’ or the Essence. “When one is confronted with a challenging growing season, in order to make a great wine, one has to focus on simply extracting that year’s very essence. And, in fact, the 2014 year unexpectedly turned into a pleasant surprise, since the heavy rains and low temperatures during the ripening stages were followed by a September and October which brought us exemplary weather conditions; the final result was a somewhat later harvest, which delivered optimally vibrant fruit with crisp acidities. We complemented that result with meticulous hand-picking, whose objective was to select only the most sound, healthy clusters. What one notices immediately about the 2014 vintage is the high quality of the tannins: elegant and silk-smooth, with no rough edges at all. 2014 will be remembered in Tuscany for the summer that never was and as one of the most unusual. A warm and rainy winter was followed by a mild and dry spring, a distinctively average July and a cold and rainy August. All of this created difficult conditions for the ripening of the grapes. September and October, however, brought perfect conditions, with mostly sunny and dry weather, offering excellent conditions for ripening, particularly for Merlot. While we had an incredible amount of extra work to do in the vineyard, the combination of the Estate’s varied subsoils, the varietals of Cabernet Sauvignon and Merlot and our own detailed knowledge of the terroir all played distinctively in our favour. Ornellaia underlines the fundamental difference in terroir between the coast and the central Tuscan vineyards.”

“Today, as the Vendemmia d’Artista marks its 9th year, it continues to attract funds for the restoration of artworks belonging to our universal heritage,” stated Giovanni Geddes da Filicaja, Managing Director of Ornellaia. “In just nine years we have succeeded in donating more than one million euros across the globe, just a small drop perhaps, but there is much more to come”.

“The Vendemmia d’Artista series is a wonderful way of combining the characteristics of each vintage of Ornellaia with a world class artist’s interpretation of that specific year. For the ninth edition, Sotheby’s Wine was delighted to continue our collaboration with the launch of Ornellaia 2014 L’Essenza Vendemmia d’Artista, through a very special dinner and auction benefiting the Solomon R. Guggenheim Museum in New York” commented Jamie Ritchie, Sotheby’s CEO & President, Americas & Asia.

To date, Ornellaia’s Vendemmia d’Artista art project, over its nine annual editions, has raised almost 2 million euros, all of which it has donated to foundations and museums that support art across its full range of expressions, including the Whitney Museum of New York, the Neue Nationalgalerie of Berlin, the Royal Opera House of London, the H2 Foundation of Hong Kong and Shanghai, as well as the Museo Poldi Pezzoli of Milan, the AGO of Toronto, the Fondation Beyeler of Basel, and the Hammer Museum of Los Angeles.

Ornellaia has received considerable recognition also in the national and international press, and is consistently ranked among the top estates by the Italian Wine Guides, including Gambero Rosso, Espresso, Veronelli, Duemilavini AIS, and Luca Maroni.

ERNESTO NETO
Born in 1964 in Rio de Janeiro, continues to live and work in Brazil. He studied at the city’s Escola de artes visuais do Parque Lage in 1994 and in 1997, and also attended the Sao Paulo Museum of Modern Art from 1994 to 1996.

Neto, known for his large installations utilizing mesh, fabrics, spices, and stones, draws inspiration from a wide range of sources, from the modernist traditions of Biomorphism, Arte Povera, and American Minimalism, to Brazilian Neo-concretism, succeeding in unifying together into a coherent and harmonizing discourse apparently disparate influences. Since the 1990s, Neto has created an oeuvre in which elements such as improvisation and chance intersect with geometry and gravitational force, to fashion an utterly unique artistic language. His activity brings together mind and body through the experience of space, utilising the senses to align together the viewer’s physical and psychological dimensions. Taken together, these aspects constitute both a distinctive signature as well as an unprecedented vocabulary that has influenced a generation of artists throughout the world, making Ernesto Neto one of the world’s most respected and influential artists.

THE SOLOMON R. GUGGENHEIM FOUNDATION
Founded in 1937, the Solomon R. Guggenheim Foundation is dedicated to promoting the understanding and appreciation of modern and contemporary art, through exhibitions, education programs, research initiatives, and publications. The Solomon R. Guggenheim Museum, New York, joined by the Peggy Guggenheim Collection, Venice in 1979, has since expanded to include the Guggenheim Museum Bilbao (opened 1997), and the Guggenheim Abu Dhabi (currently in development). The Guggenheim Foundation continues to forge international collaborations that take contemporary art, architecture, and design beyond the walls of the museum.