Data is the lifeblood of the modern global economy, yet 34 countries and counting have enacted unwarranted policy restrictions that make it more expensive and time consuming—if not illegal—to transfer data across national borders, says the Information Technology and Innovation Foundation (ITIF). ITIF provides a complete catalogue of these barriers to the flow of data and a review of studies detailing their economic costs in a new report out today. 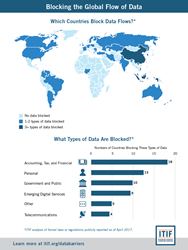 Data is the lifeblood of the modern global economy, yet 34 countries and counting have enacted unwarranted policy restrictions that make it more expensive and time consuming—if not illegal—to transfer data across national borders, says the Information Technology and Innovation Foundation (ITIF). ITIF provides a complete catalogue of these barriers to the flow of data and a review of studies detailing their economic costs in a new report out today.

The practice of locking data behind geographic borders is costing the global economy billions of dollars—with the burden falling not just on trading partners, but also on the very countries that impose barriers on data, the tech-policy think tank finds. The report urges policymakers around the world to step up their efforts to roll back these unwarranted barriers to modern trade, especially in the countries that use them most, such as China, Russia, Indonesia, Nigeria, and Vietnam.

“The use of data analytics in virtually all industries—both tech-driven and traditional—has streamlined business practices and increased efficiency. But it has also made the movement of data more important than ever,” said Nigel Cory, ITIF’s trade policy analyst and the report’s author. “While countries employ a range of rationales for blocking data—from protecting privacy to stimulating economic growth—none holds up under scrutiny. It’s time to push back. Policymakers should appeal to other nations’ self-interest: These policies won’t help them reach their privacy, security, or economic goals, but they’ll force all firms that use IT services to pay more—a self-inflicted wound that undermines economic growth and their own firms.”

As Cory’s report explains, 34 countries have restricted data from leaving their borders, with many more considering similar laws. A review of the current research finds that these barriers impose significant costs: reducing U.S. GDP by between 0.1 and 0.36 percent; causing prices for some cloud services in Brazil and the European Union to increase by between 10.5 and 54 percent; and reducing GDP by between 0.7 and 1.7 percent in Brazil, China, the European Union, India, Indonesia, Korea, and Vietnam, all of which have either proposed or enacted data localization policies.

Cory details two main drivers of these costs: At the firm level, barriers to data flows make firms less competitive, because companies are forced to spend more than necessary on IT services. At the country level, barriers make it harder and more expensive for domestic companies and citizens to gain global exposure, benefit from the research and best practices that accompany data flows, and utilize innovative new goods and services that rely on data.

The report explains that concerns about privacy, cybersecurity, and economic growth are the main reasons countries give when they institute these policies. As Cory details, however, these rationales are faulty:

-In almost all cases companies are bound to a nation’s privacy and data protection laws merely by doing business there—thereby establishing a legal nexus—so a firm cannot escape complying with a nation’s privacy laws simply by transferring data overseas.
-The security of data does not depend on where it is stored, only on the measures used to store it securely. A secure server in Laos is no different from a secure server in Brazil. If anything, by allowing data to leave its borders, a country allows its companies and individuals to store their data with companies that use the most advanced measures to protect the data, regardless of where it is physically stored.
-Countries are mistaken in believing that if they restrict data flows, they will gain a net economic advantage from companies relocating data-related jobs to their nation. As data centers have become more automated, the number of jobs associated with each facility has decreased, especially for technical staff. Conversely, by allowing local companies to store data anywhere in the world, these countries can reduce costs and make their firms and workers more productive, bolstering the local economy.

Cory concludes with recommendations to policymakers in the United States and other countries for how to address this barrier to modern trade.

He urges the Trump administration to:

-Negotiate trade agreements that prohibit and eliminate digital barriers;
-Devote more resources to, and develop better measures of, the digital economy and trade;
-Initiate enforcement cases against countries that have enacted digital-protectionism policies;
-Propose and negotiate a “data-services agreement” to address digital trade barriers; and
-Propose and negotiate a “Geneva convention on the status of data” to establish international legal standards for government access to data.

The report also urges policymakers in other countries to:

-Recognize the critical role of data flows in promoting growth and innovation and abandon data-localization policies;
-Promote international interoperability in privacy and data protection; and
-Encourage international organizations, such as the World Trade Organization and the Organization for Economic Cooperation and Development, to focus on digital trade barriers.

“Data flows are essential to today’s modern economy,” conclude Cory. “This fact will only become more evident as innovative firms and individuals around the world come up with new ways to leverage data. While we do not always know exactly what new innovations will look like, we do know that data will be central. The Trump administration, with the support of like-minded countries, needs to understand the importance of global data flows and step up efforts to prohibit and roll-back these digital trade barriers.”