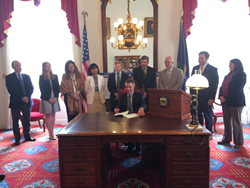 In what has become an annual tradition, these improvements to our captive legislation illustrate Vermont’s ongoing commitment to the captive insurance industry, which has been an economic boon for the state.

“In what has become an annual tradition, these improvements to our captive legislation illustrate Vermont’s ongoing commitment to the captive insurance industry which has been an economic boon for the state,” said Governor Scott,“This bill will help to further advance Vermont’s reputation as the ‘Gold Standard’ for domiciles and will provide greater flexibility and clarity going forward for our companies.”

“As we have for many years, we worked with the VCIA to develop a bill that helps the industry grow while maintaining prudent regulatory standards. The legislative process is part of making sure that our captive law meets the needs of business within a regulatory framework that recognizes the special purposes for which captives are formed” said David Provost, Deputy Commissioner of Vermont’s Captive Division.

“Governor Scott has supported the captive insurance industry in Vermont since his days as a State Senator and Lt. Governor. We’re delighted to have his continued support and that of the legislature in keeping pace with the changing needs of the industry,” said Richard Smith, President of the Vermont Captive Insurance Association which lobbied for the changes. “I have already been contacted by a number of entities interested in Vermont’s new agency captive provision.”

A summary of the other changes in the law include the following:

Expand Dormant Captives to All Captive Types -- Dormant status is expanded to ALL captive types in Vermont, which allows companies to stay in Vermont at a very low cost, ready to be reactivated when and if the need arises.

Risk Retention Group Governance Standards -- The new law provides for relief from auditor partner rotation requirements under the same circumstances and with the same considerations as other current captive and traditional insurance regulations require, to eliminate conflicting provisions in statute and regulation.

A complete copy of the bill will be posted on the Vermont Legislature’s website, and in the interim a copy of the bill as passed with amendments can be found at: http://www.vermontcaptive.com/laws-regulations/laws.html. The law takes effect upon passage.