18th Annual Event Honors ‘The Best of Tech in Indiana’ 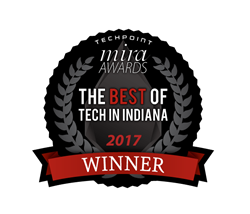 ClearObject, an Internet of Things (IoT) Systems Innovator, is honored to win Scale-up Company of the Year ($5M-$20M) for the 18th annual TechPoint Mira Awards presented by Angie’s List, Genesys and Salesforce.

TechPoint, the growth initiative for Indiana’s technology ecosystem, produces the Mira Awards each year to honor the most innovative and successful technologies and technology companies in Indiana, as well as entrepreneurs and educators. Winners were announced during the annual Mira Awards gala at The Westin Indianapolis on April 29, 2017.

There are significant opportunities for tech businesses in Indiana, and in order to continue to sustain growth and set a precedent as a tech hub, the Mira’s Scale-up Company of the Year ($5M-$20M) award provides acknowledgment and helps generate recognition for those who have moved beyond the start-up phase to take their business to the next level.

“The ClearObject team has worked hard to help clients bring their IoT products and projects to life and to be selected from among nearly 100 nominees is truly an honor,” said John McDonald, CEO of ClearObject. “It is rewarding to spend an evening celebrating not only our team’s achievements, but the success and dedication of Indiana’s entire technology community.”

A total of 15 award winners and three honorable mentions were chosen from the 90 outstanding companies, organizations, and individuals who were selected as nominees this year out of the 180 applications received highlighting achievements during the 2016 calendar year.

“In just over a decade, Indiana has seen more than $6.5 billion in acquisitions and IPOs from our tech community. More recently, in 2016, two-thirds of all the venture capital dollars and three-quarters of all the deals raised in Indiana went to tech companies,” said TechPoint President and CEO Mike Langellier. “The Mira Awards exist to celebrate our state’s tremendous tech success stories and amplify them to media, investors and technology buyers nationwide.”

The award comes just over a month after it was announced ClearObject had won the first-ever People’s Choice Mira Award for Best Tech Event for IndyIoT Symposium.

A complete list of the 2017 TechPoint Mira Awards winners is available at http://www.techpoint.org/mira.

About ClearObject
ClearObject is an IoT Systems Innovator helping the world’s best companies connect their bold ideas to the Internet of Things. We bring our years of experience, our team of experts and our coalition of leading partners together to make your IoT solutions a reality.

About TechPoint
TechPoint is the nonprofit, industry-led growth initiative for Indiana’s technology companies and overall tech ecosystem. The team is focused on attracting talent, accelerating scale-up companies, activating the community, and amplifying stories of success. For more, visit http://www.techpoint.org.