Through participation in the 2017 Tour de Cure Lake Nona event, the C&P/LassiterWare cycling team raised $32,622, making them the 2nd highest corporate fundraisers for the event. 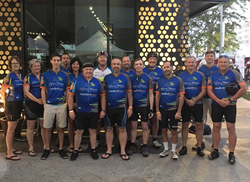 Cuhaci & Peterson teamed with LassiterWare to participate in the 2017 Tour de Cure at Lake Nona, benefitting the American Diabetes Association. The event had more than 1200 total participants and raised nearly $750,000. Of that, the C&P/LassiterWare team of 34 cumulatively rode more than 1300 miles at the event and raised a grand total of $32,622 as of April 26, 2017 when fundraising officially closed.

In addition to being the second largest corporate fundraiser for the event, the team also had eight Champions, defined as an individual who raises $1,000+. Chris Abbey, Sheila Cribb, Mindy Delose, James E. (Jed) Downs, Steve Duffy, Josh Inman, John Kern and Lonnie Peterson were honored at a reception for Tour de Cure Champions on March 23, 2017 at the Jaguar of Orlando Dealership.

Prior to the ride itself, C&P/LassiterWare Team Captain and Champion, Chris Abbey commented, “I’m excited, amazed, and in awe at all the support and hard work that has gone into this year’s event and grateful to be a part of something so incredible.”

After the event, retired C&P Co-Founder and one of our team’s 8 Champions, Lonnie Peterson, had this to say about his 50 mile ride, “It was a Great day, and I was in better shape this year than last . . . probably should have upped my mileage to 65. No matter which direction we were going it felt like the wind was at our back! So, like the pros, I passed everyone I could on the last hill and sprinted to the finish. It was a great day for an awesome cause. Proud to be a part!”

About Cuhaci & Peterson
Cuhaci & Peterson is a national A/E/P firm specializing in commercial design. Headquartered in Orlando, Florida since 1978, the firm also has offices in Philadelphia, Boston and South Florida and is licensed in 49 states. Cuhaci & Peterson offers Architectural, SMEP Engineering, Fire Alarm/Protection, Landscape and Planning services as well as, In-House Government Relations and Interior Design on a variety of project types.