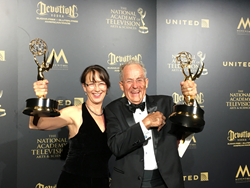 The Taiwan Tourism Bureau has partnered with the Public Broadcasting Service’s (PBS) travel series《Joseph Rosendo's Travelscope》to co-produce “Taiwan’s Penghu Islands”, a feature travel series highlighting the Penghu archipelago. The series was awarded two Emmy Awards at the 44th Daytime Creative Arts Awards held today in Los Angeles. The beautiful Penghu Islands have not only won themselves the Emmy’s, but also has won the hearts of many avid-travelers and garnered overnight fame.

Certainly, the “Taiwan’s Penghu Islands” feature travel series was the biggest winner of the 44th Daytime Creative Arts Awards ceremony, bringing home all four Emmy Nominations, including: Outstanding Travel and Adventure Program; Outstanding Directing in a Lifestyle/Culinary/Travel Program; Outstanding Host in a Lifestyle/Travel/Children’s or Family Viewing Program; and Outstanding Cinematography. This not only marks《Joseph Rosendo's Travelscope》travel series’ biggest success at the Emmy’s yet, but as the 2017 Penghu Ocean Fireworks Festival commences from April 20th to June 22nd, Taiwan and its outlying islands is sure to shine on the global stage.

Joseph Rosendo, the charismatic host of 《Joseph Rosendo's Travelscope》, could not hide his delight as he expressed, “We are thankful to be recognized once again by the Television Academy. It is always a thrill to be honored by your peers who really know what it takes to create an outstanding television series. In addition, we are grateful to be a part of the PBS family which is supported by the Corporation for Public Broadcasting which has served the American people so well for so long. They deserve our government’s continued support. Joseph Rosendo’s Travelscope’s goal is to introduce people to people, celebrate other cultures and promote travel which, as Mark Twain said, is fatal to prejudice, bigotry and narrow-mindedness. We strive to be a positive force in this world. Our thanks to Taiwan Tourism Bureau for helping us accomplish our mission.”

Additionally, the deputy director of Taiwan Tourism Bureau’s Los Angeles office, Cathy Hung, expressed excitedly, “We are ever so grateful to the Travelscope team for producing such quality travel series for Taiwan. The latest data made available by the U.S National Travel and Tourism Office indicates Taiwan surpassing both South Korea and Thailand for the first time to become the sixth best travel destination in Asia. Such honoring achievement must not only be attributed to PBS’s continued support and promotion of the island, but also be attributed to every Taiwanese individual who worked steadfastly and humbly to transform Taiwan into a better place, making it possible for travelers of all walks of life to experience the sincerity of the locals as well as to appreciate the preservation and conservation of humanities and natural ecology of Taiwan. Lastly, in 2018, The Most Beautiful Bays in the World, MBBW will hold its annual global meeting in Penghu, and we welcome all who enjoyed Travelscope’s feature series on Penghu Islands to pay a visit.”

As the bureau’s director of Taiwan Tourism Bureau in LA, Brad Shih held numerous meetings with Joseph Rosendo and Julie Rosendo during the production process to discuss all aspects of Penghu’s tourism materials—a long period of meticulous planning between the two went into ensuring a shooting script that encapsulated the essence of the Penghu Islands. Subsequently, the thoughtful planning for the series culminated in the incorporation of “Taiwan Fun on the Tropic of Cancer,” a tourism promotional event that allows tourists to explore the everyday life of the Taiwanese, offering a novel perspective on the hidden gem in Asia that distinguishes itself from other travel destinations. In “Taiwan’s Penghu Islands,” host Mr. Rosendo is seen following closely the lives of local fishermen—from embarking on a fishing voyage, unloading and auctioning the catch at the Magong Fish Market, sun-drying fish at Jing’an, to learning the aquaculture of oyster farming at the Sea Farm Garden. On a different day, Mr. Rosendo is seen visiting a local farming village, frolicking the country roads of Nanliao on a traditional oxcart, building a wall with cow manure, making incense cones at the Erkan Historical House with hand-picked local herbs, to ending the colorful excursion with the splendid Penghu Ocean Fireworks Festival of Taiwan Fun on the Tropic of Cancer.

Certainly, the charm of the island has earned itself global recognition. The amalgamation of Travelscope’s feature series and the promotional campaigns spearheaded by the Tourism Bureau has made Taiwan’s Offshore Islands Tour and the Taiwan Fun on the Tropic of Cancer Tour a new favorite among backpackers from around the globe. The 44th Daytime Creative Arts Emmy Awards Ceremony marks the second time The Bureau and PBS’s Travelscope stand together on stage as co-recipients of the Emmy Awards. This calls for an even stronger partnership next year to produce what is touted as one of the world’s three major religious festivals, the “Dajia Mazu Pilgrimage” in the Mazu Island feature series expected to air on PBS’s《Joseph Rosendo's Travelscope》in early 2018.