Sixty-nine of the most selective private colleges ran average annual budget surpluses of $139 million over the last four years, but admitted fewer than 20 percent of Pell Grant recipients 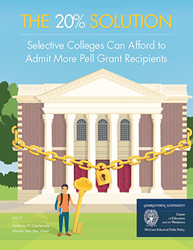 Highly-qualified Pell Grant students are being turned away from the opportunity for an elite college education, which is more and more open only to the wealthy.

The 20% Solution: Selective Colleges Can Afford to Admit More Pell Grant Recipients also reveals that about 86,000 Pell Grant recipients score at or above the median on standardized tests for students at selective colleges (1120 or higher on the SAT/ACT) but do not attend them. If every college was required to have at least 20 percent Pell Grant recipients, more than 72,000 more Pell students would have to be admitted to 346 colleges and universities.

“Highly-qualified Pell Grant students are being turned away from the opportunity for an elite college education, which is more and more open only to the wealthy,” said Anthony P. Carnevale, director of the Georgetown Center and lead author of the report.

Recent bipartisan legislation from Sen. Johnny Isakson (R-GA) and Sen. Christopher Coons (D-DE) has tried to address this issue, requiring colleges with the lowest ratio of Pell Grant recipients to admit more low-income students, or pay a penalty. The goal is to give more low-income students a shot at getting a degree from an elite college.

The average Pell Grant is $3,724 (the maximum is $5,815), but that covers only a small portion of the cost of attending a selective college. Many also suggest that selective colleges cannot afford to enroll more Pell Grant students because it would create too great a strain on their financial aid budgets. On the contrary, the study finds that many selective colleges average large budget surpluses. In fact, the 69 most-selective private colleges had an average annual budget surplus of $139 million from 2012-15, and they have a median endowment of $1.2 billion. Sixty-nine of the 79 most selective private colleges and universities have less than 20 percent Pell Grant recipients.

“Competitive pressures keep elite colleges from admitting low-income students even when they are qualified,” said Martin Van Der Werf, associate director of editorial and postsecondary policy at the Georgetown Center and co-author of the report. “If the colleges themselves won’t change their admissions policies, it’s worth considering whether we should require a minimum enrollment standard of 20 percent Pell Grant recipients.”

To view the report and a full list of schools with Pell percentages and budget surpluses, visit cew.georgetown.edu/pell20.

The Georgetown University Center on Education and the Workforce is an independent, nonprofit research and policy institute that studies the link between individual goals, education and training curricula, and career pathways. The Georgetown Center is affiliated with the Georgetown McCourt School of Public Policy. For more information, visit: cew.georgetown.edu. Follow us on Twitter @GeorgetownCEW, on Facebook, and LinkedIn.