Jennifer Jasper’s New Book “Who Came Home?” is the Story of a War Hero who Comes Home to His Family, but Must Face His Demons

Recent release “Who Came Home?” is the story of John Taylor’s journey that begins when he joins the armed forces in England at a young age, and survives life altering experiences to return home to his family and face the damage of the trauma he incurred. 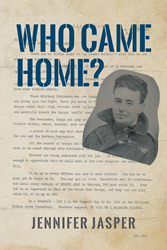 John Taylor survived the sinking of a destroyer vessel where some 3000 lives were lost, as well as evacuated from the beaches of Saint-Nazaire in France with the British Expeditionary Forces. He then became a Desert Rat in North Africa, during which time he kept a journal of notes. His final mission involved the most famous invasion in history-the storming of Normandy. Upon returning home from his life in combat, he bears no physical scars, however his family quickly sees the toll war has taken on his psyche.

John Taylor returned home in 1945, six years after joining the army, with no visible scars. But through no fault of his own, he returned home with his own demons. No doubt suffering from shell shock, which today is called post-traumatic stress disorder, the man who came home was not John Taylor.

Published by New York City-based Page Publishing, Jennifer Jasper’s book is a somber reflection on the horrors of war and how families are forced to bear the burden of this trauma.

Readers who wish to experience this potent work can purchase “Who Came Home?” at bookstores everywhere, or online at the Apple iTunes store, Amazon, Google Play or Barnes and Noble.

Page Publishing is a traditional New York based full-service publishing house that handles all the intricacies involved in publishing its authors’ books, including distribution in the world’s largest retail outlets and royalty generation. Page Publishing knows that authors need to be free to create - not bogged down with complicated business issues like eBook conversion, establishing wholesale accounts, insurance, shipping, taxes and the like. Its roster of authors can leave behind these tedious, complex and time consuming issues, and focus on their passion: writing and creating. Learn more at http://www.pagepublishing.com.