Nils D. Olsson’s New Book “Letters To Sweden” is the Story of a Swedish Family in the 1920’s and How They Evolved and Made Their Way in the World, at Home and Abroad

Recent release “Letters To Sweden” from Page Publishing author Nils D. Olsson focuses on the first born son of a Swedish family in the 1920’s, and his journey that takes him to the United States. Meanwhile, the sixty years of handwritten letters to his mother, in her treasured America’s box, found their way to the USA, where they were translated into English and found their way into our story. 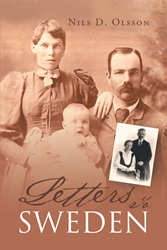 Nils D. Olsson, a veteran and engineer, has completed his new book “Letters To Sweden”: an inspirational tale of a man’s journey from humble beginnings to world travel and ultimately settling in the United States.

According to Olsson, “(I) spent (my) time in the USAF from 1952 to 1956, as a radar repairman in the Korean War, on a remote island off the coast of Siberia, with an early warning radar detachment. Upon returning to civilian life, (I) earned a degree in civil engineering from the University of Maryland, on the GI Bill of Rights. (I) also did advanced studies in mathematics at the George Washington University. (I) have been a registered professional engineer in ten states, practicing engineering on a worldwide basis for forty years. In this capacity, (I) have more than one hundred technical papers published in the civil engineering field. Of a more recent nature, (I) have become a published author with ‘No Place to Go but Up,’ about (my) exploits in the USAF during the Korean War. (I) have been married to (my) wife, Sue Ellen, for fifty-five years, and (we) have raised four children.”

Published by New York City-based Page Publishing, Nils D. Olsson’s inspirational tale begins in 1920 at Umea, Sweden, a small riverside town high on the west coast of the Gulf of Bothnia. Olga and Axel Olsson have four boys, closely spaced in age, to raise in this rugged environment. Axel Olsson lives on a military pension for an accidental injury sustained while serving as a sergeant in the Swedish military. Correspondingly, Olga was a government-trained midwife, delivering babies from all sectors of society.

The firstborn child to the Olssons’ was the trailblazer and left home to find his way when he graduated with a very fine education from the gymnasium at sixteen, but he could not gain entrance to the state university system due to no fault of his own. Consequently, he went to sea on a great sailing ship and found his way on a globe-girdling trip into the future, in the world depression, between the two great world wars. Swede, as he was sometimes called, was swept into the US peacetime Army for a three-year stint from 1928 through 1930. His entire enlistment was served at Fort Hoyle, Aberdeen, Maryland, concurrently with two officers who were destined for the history books, Major George S. Patton Jr. and First Lieutenant A. C. McAuliffe. Swede was honorably discharged and made a place for himself in Baltimore during the prohibition years. He married a Virginia farm girl who had moved to the big city to escape the rigors of the farm. Swede struggled to acquire a trade and landed a position with an airplane builder in the Baltimore area. His gymnasium education and familiarity with the metric system helped him gain entry into a highly skilled trade as a machinist/toolmaker building bombers for the French and British at Martin in 1939 and 1940. After twenty-five years at Martin, he retired to ownership of a small boatyard and to see his two sons marry and have families, with six grandchildren. He quietly passed away in 1981, handsomely eulogized by his best friend’s son while living on his property at Bodkins Creek, Maryland.

Meanwhile, the sixty years of handwritten letters to Grandma, in her treasured America’s box, found their way to the USA, where they were translated into English and found their way into our story.

Readers who wish to experience this inspiring work can purchase “Letters To Sweden” at bookstores everywhere, or online at the Apple iTunes store, Amazon, Google Play or Barnes and Noble.