The Ritz-Carlton, Laguna Niguel Showcases Works of Art That Span 85 Years Of History 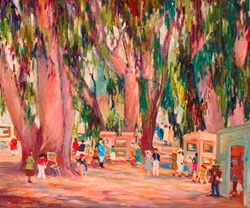 The Ritz-Carlton, Laguna Niguel presents “85 Years of Art,” a summer exhibit in honor of the resort’s long-term partnership with Pageant of the Masters and Festival of Arts. Guests are invited to view this one-of-a-kind exhibit on display in the Art Exhibit Space at the oceanfront resort through September 5, 2017.

“2017 marks the 85th Anniversary for the Festival of Arts. This year’s exhibit, Celebrating 85 Years of Art, will focus on a range of Permanent Art Collection artworks from 1913 to 2015, historic Pageant photographs, vintage news articles, and early Festival of Arts and Pageant of the Masters advertising materials,” said Exhibit Curator Pat Sparkuhl.

Additional pieces include Advertisement Posters from 1941, 1958 and 1966, as well as photographs of three Pageant of the Masters Tableaus – The Laughing Cavalier by Franz Hals in 1940, The Gleaners by Jean Francois Millet from 1940, and The Rehearsal by Norman Rockwell from 1958.

In celebration of its 85th anniversary, this year’s Pageant of the Masters theme is THE GRAND TOUR, showcasing people’s desire in the 17th and 18th centuries to experience the world’s great art firsthand. Inspired by the European tradition of continental travel on “the grand tour,” early travelers would set out on pilgrimages by land and sea to the great cultural centers of Europe, and eventually the globe, often risking life and limb to stand in the presence of masterpieces. A ticket to the Pageant’s THE GRAND TOUR becomes a passport to experience spectacle, music, stories and grand illusions as masterpieces come to life. Guests this year will also enjoy the redesigned grounds that will offer a new layout for the gallery spaces, art workshops, and the lawn where patrons can picnic and listen to concert presentations. The extensive overhaul will wrap up just in time for the Festival of Arts opening in July.

For a more comprehensive art experience, guests can book one of two Pageant of the Masters overnight experiences that feature incredible seats and exclusive offerings. The Behind the Velvet Rope Experience features ocean view accommodations on The Ritz-Carlton Club Level, two premium seat tickets to the Pageant, a guided docent tour of the Festival, and a backstage tour of the Pageant for $1,999 per night. The Pageant of the Masters – THE GRAND TOUR Experience includes overnight accommodations and two premium seat tickets to the Pageant with rates starting at $849 per night.
# # #

About Pageant of the Masters and Festival of Arts
The Pageant of the Masters is the Festival of Arts’ crowning jewel and arguably one of the most unique productions in the entire world. Real people magically transformed into life-sized re-creations of famous works of arts. A live narrator guides the audience through the story of each living picture accompanied by the music of a professional orchestra. The Festival of Arts is California’s premiere fine art show. The Festival’s prestigious juried art show includes a wide variety of media such as paintings, photography, printmaking, sculpture, jewelry, handcrafted wood and furniture, ceramics, glass and more – all by 140 of Orange County’s finest artists.

About The Ritz-Carlton, Laguna Niguel
The Ritz-Carlton, Laguna Niguel is a re-imagined surfside retreat that awakens guests’ senses with its unique ocean-front setting and remarkable service heritage. The resort is the premiere destination for travelers who desire a playful approach to true Southern California luxury. Perched atop a bluff with panoramic views of the Pacific Ocean and more than three miles of sandy beach, the resort continues to redefine the guest experience by creating distinctive, unforgettable, and #EpicMemories that are presented against an extraordinary backdrop. For more information or reservations call 800-241-3333, the hotel directly at 949-240-2000, a travel professional or visit http://www.ritzcarlton.com.

Pageant of the Masters Make Up Session