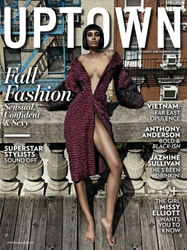 Otto Models a leading modeling agency, is pleased to announce Empire actress AzMarie Livingston as the newest addition to its successful Women's Model Board. Ms. Livingston was cast to play the role of Chicken on the Fox show Empire.

Ms. Livingston is an American fashion model, actress and singer who rose to fame after appearing on America's Next Top Model: British Invasion in 2012. Livingston began her career as a runway model in Los Angeles and New York City. From 2009 to 2011, she appeared in many different magazines and participated in several fashion shows, including London Fashion Week and BET's Rip the Runway.

Otto Models will drive Ms. Livingston's influence in the fashion and beauty space through world-class styling, editorials and campaigns through the agency's large network of clients. "We're thrilled to work alongside AzMarie and her management team. She has such unique style," said Tereza Otto, President.