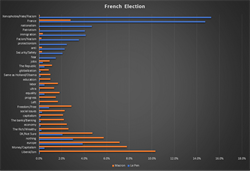 Macron’s inability to connect with voters who find Le Pen objectionable could lead them to abstain from voting, potentially securing a win for Le Pen.

A new kind of political poll using the text analytics software platform OdinText to analyze unaided comments from French citizens instead of relying on conventional multiple-choice questions has determined that Marine Le Pen is positioned for an upset victory in the May 7th runoff election for the French presidency similar to Donald Trump’s victory in the U.S. presidential election.

The poll, conducted online April 28-30, asked a randomly-selected general population sample of 3,000 French citizens to answer a single question: “What does [the candidate] stand for?” Half of the respondents received this question with Emmanuel Macron’s name and the other half was given Marine Le Pen. Responses were analyzed using OdinText software, which identified and quantified potentially important themes/ topics/ideas in people’s comments and also assessed the emotions expressed.

“Marine Le Pen is seen as a racist, yes, but text analysis also showed that among the French she is positioned as a reformer with a clear agenda around immigration and putting France first. Her positioning in the eyes of French respondents is eerily similar to that of Donald Trump in a similar poll we ran days before the U.S. election in November,” said Tom H. C. Anderson, managing partner of OdinText.

“Emmanuel Macron, in contrast, remains a relative enigma to the French people. Almost twice as many French people said they aren’t sure what Macron stands for compared to Le Pen. Worse yet, French respondents most frequently associated him with free-market capitalism, which is generally not a political asset with this electorate,” Anderson said.

Conventional political polls have predicted a 60/40 victory in favor of Macron, but Anderson says the analysis of actual comments from the French people indicate the race is much closer than it appears, and that Macron’s inability to connect with voters who find Le Pen objectionable could lead them to abstain from voting, potentially securing a win for Le Pen.

“We saw a very similar pattern in the data we collected prior to the U.S. election, which suggested a victory may not so much amount to an endorsement of one candidate as a rejection of the status quo. Of the two candidates, Le Pen is better positioned as the reformer, and the data suggest Macron has not inspired the confidence and support of people who would vote against her,” Anderson said.

A detailed analysis of the polling data has been published on the OdinText blog here. OdinText Founder and Managing Partner Tom H.C. Anderson is also available to answer questions and for interviews.

ABOUT ODINTEXT
OdinText is a patented SaaS (software-as-a-service) platform for natural language processing and advanced text analysis. Fortune 500 companies such as Disney and Shell Oil use OdinText to mine insights from complex, unstructured text data. The technology is available through the venture-backed Stamford, CT firm of the same name founded by CEO Tom H. C. Anderson, a recognized authority and pioneer in the field of text analytics with more than two decades of experience in market research. He tweets under the handle @tomhcanderson.
For more information, visit http://www.odintext.com