After raising over $100,000,000 on Indiegogo, Titan Note aims to continue selling the recording and transcription device at a discounted price 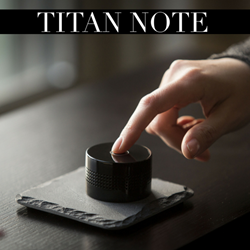 “We think Titan Note is a groundbreaking product, not just for students, but for almost anyone. Titan Note can be of use to doctors, lawyers, writers, musicians and more."

Titan Note is an innovative recording and transcription device that makes taking notes by hand obsolete. Titan Note accurately takes, summarizes and translates spoken word. On Indiegogo, Titan Note was able to raise $1,059,387 in funding in 60 days. With the transition to Indiegogo’s InDemand platform, Titan Note is able to open the door to even more pre-orders at a discounted price.

When Titan Note was introduced in February 2017, backers were quick to pre-order the groundbreaking new device. Titan Note is able to transcribe spoken word using multiple layers of cutting edge far field continuous speech recognition. To accurately identify who is speaking, it uses advanced voice biometrics and will label different speakers in the transcribed notes.

“We think Titan Note is a groundbreaking product, not just for students, but for almost anyone. Titan Note can be of use to doctors, lawyers, writers, musicians and more. It can also be a very helpful device for someone suffering from a condition that makes it difficult for them to physically take notes or focus,” said Titan Note CEO, Erik Jansson. “Titan Note isn’t a recorder and it isn’t just for quick thoughts. It can record entire lectures and speeches. It’s one of the most advanced of its kind. We’re eager to see how our InDemand campaign goes since there was such a huge interest in Titan Note’s Indiegogo campaign."

Titan Note uses 360-degree, noise-canceling microphones to filter out the background noise and improve the accuracy of the text. The transcription only has a few seconds of delay and the error rate for Titan Note is similar to what the human error rate is for speech.

Titan Note offers charging capabilities with its USB port, which is compatible with smartphones and tablets. Titan Note also doubles as a speaker. Users can listen to their favorite music or amplify a call on speakerphone. Titan Note is also water resistant, so it’s ready to go anywhere.

Titan Note works with its free application so users are able to get immediate access to their transcribed notes. Users can also translate their notes into 10 different languages including English, Spanish, German, French, Portuguese, Italian, Dutch, Swedish, Danish and Norwegian. The makers are working on adding more languages and will offer updates to their app.

Now that Titan Note is accepting pre-orders on Indiegogo InDemand, interested backers can get Titan Note for $80 and a Titan Note protective case for $18. To learn more about Titan Note or to pre-order, visit bit.ly/TitanNoteIGG.

ABOUT TITAN NOTE
When Titan Note CEO, Erik Jansson, was in college and university, many complained that it was hard to listen and take notes at the same time. It was then he realized that there had to be a better way. It was then he got to work developing a more advanced and accurate method of taking notes. Jansson has a goal to save people time, headache and missed information with the introduction of Titan Note. To learn more about Titan Note, visit bit.ly/TitanNoteIGG.