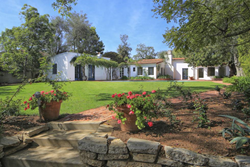 Blond bombshell, pin-up girl, close friend of the Kennedy men and highly successful actress, Marilyn Monroe starred in several of the 1950’s biggest box-office hits including "Some Like It Hot" and "Gentleman Prefer Blondes." Proceeds from her films, which grossed over $200 million, would have afforded her the ability to buy almost any mansion her heart desired. However, she purchased only one house in her own name during her 36-year lifetime. With her demanding career, three failed marriages and constant public scrutiny, she opted for a charming and very private hacienda-style home at the end of a quiet cul-de-sac in Hollywood’s Brentwood community. She purchased it in the early 1960s after her divorces from New York Yankees star Joe DiMaggio and Pulitzer Prize winning writer Arthur Miller.

In her last interview before she died in her home in 1962 from a barbiturate overdose, Marilyn told “Life Magazine” that she didn’t want them to take pictures of the inside of her house because it was important to her to keep it private. She wanted to use the guest house for friends who may be down on their luck and who needed a peaceful place to recover. She purchased the house for $75,000 partially furnished and her mortgage payments were only $320 a month. It most recently sold in 2010 for $3.85 million.

Situated on a very private gated half acre, the 2,624-square-foot house is tucked into green lawns and surrounded by mature landscaping. Built in 1929, it still retains all the beautiful architectural details that made it feel like home to Marilyn. Details include four bedrooms, three baths, cathedral ceilings with wood beams, a fireplace in the living room with Mexican tile surround, casement windows, arched doorways, tile floors, a citrus orchard and her famous kidney-shaped swimming pool.

Outside is a tree-shaded brick patio overlooking the pool and the original guest house. A poignant arrangement of tiles at the front door proclaims "Cursum Perficio." Translated, it means “My Journey is Over.” Lisa Optican of Mercer Vine holds the listing at $6.6 million.

After being placed on the market almost four years ago, the Florida waterpark home built by Celine Dion and her husband, Renee Angelil, has just sold.

Celine and Renee purchased the five-acre lot in 2008 for $7 million and began building the house in 2010 which includes 13 bedrooms, 14 bathrooms and golf simulator within its 20,000 square feet. The Bahamian-inspired mansion is open and airy with multiple glass walls for viewing the property and includes tennis court and guest house. The lavish pool system requires 500,000 gallons of water and includes two swimming pools, two water slides, a lazy river, water cannons and a tree house. After starting her Caesars Palace residency in Las Vegas and with Renee’s illness in 2013, it was not possible for Celine to get much use out of the home.

The home was initially introduced at $72 million in 2013 and went through several price cuts to $62.5 million and $45.5 million before its final sale price of $38.5 million. Sotheby’s International in Florida and Canada arranged the sale and though the new owners have not yet been identified, it is believed that they will be using the property as a vacation home.