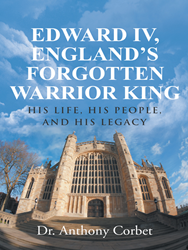 In his book, “Edward IV, England’s Forgotten Warrior King,” Dr. Anthony Corbet draws parallels between the historical figure and modern day leaders. Many observe that leaders today lack accountability, something with which Edward IV surrounded himself.

“Edward IV was always a particular hero of mine, from the moment his legacy came up in my history class,” Dr. Corbet said.

During his reign, Edward IV put an end to corruption, fueled an economic boom and lowered taxes by running the country on his own wealth. He sought input from 100 advisors including the middle-class, non-nobles and non-magnates.

“Young and old leaders alike can learn from Edward IV,” Dr. Corbet said, “He led with humility, sought counsel and explored all viewpoints before making a decision.”

Dr. Corbet tells an intense, historical tale of one of the greatest rulers in English history. When Richard, Earl of Warwick, drove Edward IV out of the country and seized the throne, the earl manipulated England as a dictator for 6 months, until Edward IV returned with vengeance. He burned his own vessel, the Antony, to the waterline and vowed never again to be chased from England. To learn more, please http://www.edwardiv.com.

About the author
Growing up in Adelaide, Australia, Dr. Anthony Corbet had a passion for English history. While in high school, he won the Annie Montgomerie Martin prize for history. In 1963, Corbet graduated from the Adelaide Medical School. After training in Pediatrics and Neonatology in Sydney and Montreal, Corbet taught and researched at Baylor College of Medicine in Houston, Texas. He practiced at the Children’s Hospital in San Antonio until he retired.