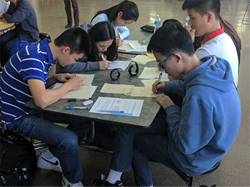 I saw the State and New England tournaments as our chance to step out from under the long shadows cast by our extraordinary neighbors in MML.

After a busy school day and at the end of a grueling week, the last thing most students would want to do is spend three hours working out high-level math problems. But on Friday, April 28th, just as they had done all year, six students from Lexington Christian Academy (LCA) piled into a van bound for Canton High School. There, they joined students from 40 other schools for the 45th annual New England Invitational Math Competition.

Simply being invited to the tournament was the culmination of many months of hard work for the fledgling team from LCA, which joined the Massachusetts Math League (MML) as the newest team in Division Six earlier this year. From the first divisional meet in October, it was clear that the students would be facing an uphill climb. The team found itself grouped with perennial powerhouse schools like Acton-Boxborough Regional High School, Canton High School, and Lexington High School.

“I was amazed at the level of talent from the other schools in our division. They earned perfect scores on so many individual rounds, and sometimes even the team round!” exclaimed sophomore Tim Zhou (Lexington, MA), who also serves as Captain of the Math Team. Tim rallied student support throughout the 2015–2016 school year in order to get a math team formed, funded, and recognized as an official student club group.

The team consistently placed in fifth out of seven teams during regular season Meets against the large, veteran public schools in its home division. However, as they continued to press onwards, the young team from LCA eventually finished 8th overall out of the 42 schools in the MML and secured a spot in the State Meet as the highest-scoring “Small” sized institution. They were invited to the State Meet in Shrewsbury on April 3rd to compete against other similarly sized, but unfamiliar schools from the Greater Boston Math League, Western Massachusetts Math League, and more.

“The grouping of schools based on enrollment size was a revelation to me,” remarked coach Max Xu. “I saw the State and New England tournaments as our chance to step out from under the long shadows cast by our extraordinary neighbors in MML. Compared to us they seemed simply massive, with student bodies numbering in the thousands and legendary coaches with decades of experience under their belts.”

During the State Meet, LCA ultimately placed 4th in the “Small” School Division, earning a ticket to the New England Invitational Math Tournament. This marked the first time in the MML’s 45 year history that a school from Massachusetts made it to the New England Tournament during its first year of competition. The stage was set.

On that sweltering Friday afternoon, sixty students from ten other “Small” schools arrived, some from as far as five hours away. As the first six individual rounds unfolded, LCA found itself neck-and-neck with the Advanced Math & Science Academy Charter School (AMSA) from Marlborough, tied for first place and just ahead of veteran schools like Buckingham Browne & Nichols, the Massachusetts Academy of Math & Science at WPI, and the Maine School of Science & Mathematics (MSSM).

MML Contest Director, Richard Olson remarked, “What the Lexington Christian Academy Math Team has accomplished this past year speaks volumes about the excellence of the mathematics curriculum at LCA, the commitment of the teachers who instructed these students in their classes, the talent and drive of all the mathletes who competed, and the leadership of their coach!”

After the final concluding team round and a dazzling challenge solution submission from AMSA, Lexington Christian Academy ultimately placed 2nd behind AMSA, edging out MSSM to take the runner-up spot. The students headed home exhausted but not quite satisfied with their second-place finish. However, with time left in the school year and the American Regional Math League competition in State College, Pennsylvania looming ahead in June, there’s still plenty of math to come.

Lexington Christian Academy is an independent college preparatory school that exists to educate young men and women in the arts and sciences in the context of a complete commitment to the gospel of Jesus Christ.