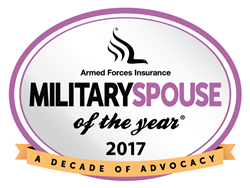 We are so proud of Brittany’s drive, leadership and personal accomplishments, along with those of all Branch Winners during this special 10-year anniversary of the Military Spouse of the Year® program.

Recognizing her outstanding commitment to the military community and work on behalf of military families with special needs members, Brittany Boccher was named as the 2017 Armed Forces Insurance Military Spouse of the Year ® presented by Military Spouse magazine. Currently serving alongside her husband at Little Rock Air Force Base, Brittany has been a military spouse for 11 years and a tireless advocate, volunteer and mentor for military families. The tenth annual awards ceremony, which took place in conjunction with national Military Spouse Appreciation Day, was livestreamed on Facebook, and video will be posted to the Military Spouse of the Year ® (MSOY) website (http://www.msoy.militaryspouse.com).

A mother of a four-year-old daughter and a two-year-old son with Down’s syndrome, Brittany Boccher (pronounced "Bocker") became the founder and director of the Down Syndrome Advancement Coalition’s “Tank Filled Life” project, partnering with organizations across Arkansas to educate the community about Down Syndrome and advocate for families with special needs family members. Brittany is also owner of Brittany Boccher Photography and co-owner of Mason Chix apparel; both companies directly support the advancement of Down syndrome treatment, research and neurodevelopmental therapies, as well as other military spouse entrepreneurs.

As the 2017 Armed Forces Insurance Military Spouse of the Year® Brittany plans to pursue ADA-accessible playground options for military children with special needs; continue her work to raise awareness and funding for services to include and engage individuals of all ages with special needs; and continue to serve as president of the Little Rock Spouses’ Club, among other volunteer positions.

Her full bio can be found at: http://msoy.militaryspouse.com/contestants/brittany-boccher/.

"We are so proud of Brittany’s drive, leadership and personal accomplishments, along with those of all Branch Winners during this special 10-year anniversary of the Military Spouse of the Year® program,” remarked Garry L. Parks, Lieutenant General, U.S. Marine Corps (Ret.), Chairman of Armed Forces Insurance, MSOY Title Sponsor. “In this time I have observed the program grow the awareness, participation and recognition of our military spouse community. Armed Forces Insurance is honored to share this day with the military community, and we applaud Brittany’s dedication and contributions like the thousands of military spouses who are, each in their own way, a force multiplier to America’s armed forces and an incredible asset to their communities. On behalf of Armed Forces Insurance, I salute each of you!"

Prior to announcing Brittany Boccher as the overall 2017 Armed Forces Insurance Military Spouse of the Year®, the Branch finalists and over 170 Base SOYs were honored at an awards luncheon held at the U.S. Chamber of Commerce and attended by military and civilian VIPs. Awards were presented by Military Spouse Magazine along with title sponsor, Armed Forces Insurance, as well as Gold sponsors Allstate, Starbucks, Capital One and Home Depot. The 2017 Branch Winners, who emerged from a pool of more than 1,500 nominees, are:

"It’s hard to believe it has been ten years since the MSOY Award began, yet we have had the privilege and honor to recognize hundreds of dedicated spouses for their inspiring work and commitment” said Suzie Schwartz, President of Military Spouse Programs, spouse of former Air Force Chief of Staff General Norton Schwartz and recipient of the 2017 Military Spouse Award for Service. “We couldn’t be happier to welcome Brittany into this family and look forward to highlighting how she is working to make life better for military spouses and their families.”

The Military Spouse of the Year® program represents millions of past and present military spouses who dedicate their lives and families to the service of a grateful nation and give back to their communities. For more information, please visit http://www.msoy.militaryspouse.com.

About Military Spouse:
Military Spouse is the leading destination and brand for the nation's 1.1 million military spouses, who contribute to their communities, the military and each other every day. Military Spouse provides online and print resources for military families on PCS, careers, education opportunities and family life. Follow us at militaryspouse.com, or on Facebook and Twitter.

About Armed Forces Insurance:
Armed Forces Insurance (AFI) is the insurance company of choice for current and retired members of the uniformed services, their children, and Department of Defense civilians. Founded in 1887 by military leaders with a single mission: to protect the property of those who protect our nation, providing premium quality, competitively priced property and casualty insurance to military professionals throughout the Armed Forces. We know our members have unique circumstances and insurance needs, and we offer a level of personalized service that is unequaled in the industry-because Our Mission is YOU - and your peace of mind. The company also furthers our strong commitment to give back to military and local communities through important programs and sponsorships including the Great American Patriot Award at the Armed Forces Bowl, the Armed Forces Insurance Military Spouse of the Year® Award, the Vetrepreneur of the Year Award, and the Military Warriors Support Foundation. In early 2015, AFI established the Armed Forces Insurance Foundation to assist in educating the military community on a wide array of key personal financial topics to help them succeed. For more information, visit the website at http://www.afi.org or call 1-800-495-8234, and follow us on LinkedIn, Facebook, Twitter and Instagram.‎