Rare Early American Fireman's Parade Hat Climbs to $18,000 and the Collection of Jonathan Orr Swan of MFA School Boston at Kaminski Auctions May 11, 2017

A rare firemen’s ceremonial parade hat from the 1700s that sold for $18,000 and Kaminski Auctions presents the collection of Jonathan Orr Swan, Professor at Museum of Fine Arts School, Boston, MA on Thursday, May 11, 2017 at 6:00 PM EST. 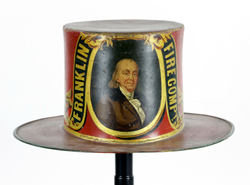 http://www.kaminskiauctions.com Kaminski’s April Fine and Decorative Art Auction on April 30, 2017 saw many of the top lots climb well above estimates with lively bidding coming from determined Internet bidders. Most notable was a rare firemen’s ceremonial parade hat from the 1700s. The hat was purchased at a local yard sale and was from the Franklin Fire Company of Germantown, Pennsylvania. Made of pressed resin felt with a hand painted picture of Benjamin Franklin, this particular “parade hat” as they were known bears the initials JF on the stovetop.

After 100 plus views on KaminskiLive, this rare piece of American history was finally hammered down for $18,000 to an enthusiastic phone bidder. These special occasion hats or “parade hats” as they became known were worn by the fireman in parades, to county fairs, and in pumping competitions.

The silver category did very well with a pair of Persian silver vases that weighed 224 oz,. sold for $9000 and a two-piece Persian silver compote weighing approximately 182 oz,. sold for $5400. Both from were from a New England estate. Similarly, a 19th century silver English Georgian solid silver tray with handles, hall marked London sold for $4500.

On Thursday, May 11th starting at 6:00 pm Kaminski Auctions will host an evening auction during Brimfield Week featuring the collection of Jonathan Orr Swan, former Professor, and Director at the Museum of Fine Arts School, Boston, Massachusetts.

Graduated from Harvard College with a BA and Masters, and an MA from the University of London. Jon had a lifelong passion for the Arts. Best known for his sculpture Jon served as a Senior Faculty Instructor in Sculpture and Multi-Media, Director of the Visiting Artists Program and Director of “Five Evenings” (an avant-garde performance series) at the MFA School, Boston during his long artistic career.

In addition to items from the Jonathan Orr Swan collection, the Brimfield Week auction will consist of curated one-of-a-kind lots that evoke the excitement and uniqueness of the Brimfield Antiques Market. Preview for this exciting sale begins Monday – Wednesday, May 8-10, 10:00 am-5:00 pm and day of sale beginning at 9:00 am at the Kaminski Auctions gallery at 117 Elliott Street (RT.62), Beverly, Massachusetts. For more information and to sign up to bid with KaminskiLIVE go to http://www.kaminskiauctions.com